A Memoir of Gambling, by Beth Raymer '08SOA (Spiegel & Grau). 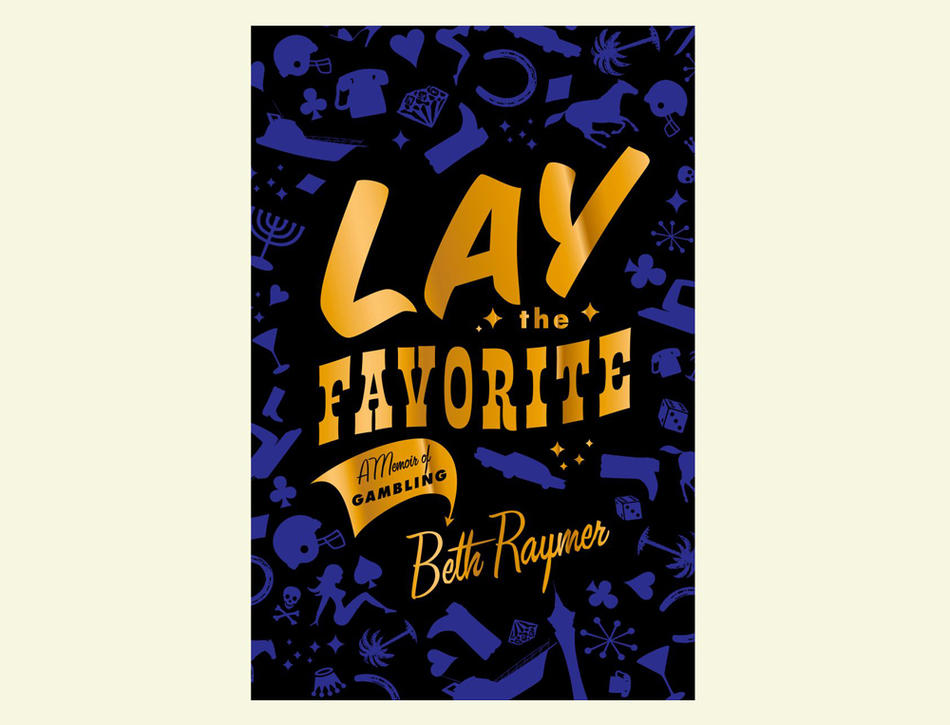 At 24, Beth Raymer and her dog moved from Florida to Las Vegas for a boy. The frenetic and frizzy-haired adventurer loved the glitz of her new town, and so, even though she and the boy broke up as soon as she arrived, Raymer stayed. To make ends meet, she stayed in a motel in a sleazy neighborhood and took orders at a Thai restaurant owned by the parents of her now ex-boyfriend. When a regular customer — a masseuse named Amy — saw her filling out an application for a cocktail waitress gig at the Stardust, Amy declared those jobs foul and offered to connect Raymer with one of her clients, a professional gambler named Dink.

The fleeting romance, the impulsive move, the sketchy jobs: These are only the first few risks Raymer ’08SOA takes in the fast-paced four years covered in Lay the Favorite: A Memoir of Gambling. Although this book starts in Vegas, the gambling Raymer gets involved in is not high-stakes card circles or blackjack tables. Instead, Raymer takes her readers into the seedy world of sports betting, which seems to be more about the obsession — the need to “get down” — than about the wager or winning itself. Through a battery of codes and passwords, money is bet on anything with a score or a winner, including basketball, football, hockey, tennis, as well as Little League games, Miss America pageants, Coney Island hot dog–eating contests, and spelling bees.

Raymer shows up for the job interview in her Converse sneakers and denim miniskirt, bra straps sticking out of her tank top, wondering why a gambler would do business at an office park “alongside divorce lawyers and accountants.” Enter Dink, of Dink, Inc.

A Stuyvesant High math wiz and Jewish bookmaker originally from Queens, Dink is now a professional bet maker in Vegas. He is a large, soft man in his late 40s who, according to Raymer, “dressed like the mentally retarded adults I had met while volunteering at a group home. His Chicago Cubs T-shirt was two sizes too small for his expansive frame. Royal blue elasticized cotton shorts were pulled high above his belly button. White tube socks were stretched to the middle of his pale, hairless shins.” Raymer develops an unlikely crush on Dink, and so does the reader, a tribute to the author’s superb ability to see the diamond inside the coal. Of course, it helps that at his office, “stacks of cash were piled as high as his bottle of Yoo-hoo.”

It is not only the money that woos Raymer. In Florida, she had worked as an in-house stripper and made plenty of green. “Each afternoon, when I awoke, it became my habit to arrange my savings into piles of one thousand dollars and place them atop my bedspread, side by side. The rows of green stretched before me like a lifetime of summers, each one more promising than the last.” After a particularly terrifying scare with a client, Raymer decided the risk wasn’t worth the payoff. Dink, Inc., on the other hand, offers the right combination of thrill and money, along with something else she is missing: kindred spirits.

Even though she is one of the few women working in the field, Raymer falls in easily with Dink’s crew as a good-natured, mothering Wendy to the Lost Boys; only these boys are a band of middle-aged misfits, con artists, and crooks. After she admits to her shady past, Dink joyfully christens her a gonif, “Yiddish for a small-time, lovable thief,” and tells her that Amy, the masseuse who recommended her for the job — and who later breaks into Dink’s office and steals thousands of dollars — had told him, ‘Hire her, she’s one of us.’”

Most readers will feel the same way. The narrator is thoroughly likable. She is honest, she is funny, she adores her dog. She is also hyper, fickle, and, as a boyfriend says, a flight risk. More than anything, though, she is adrift. The reader rejoices when this carefree and caffeinated loner finds her footing in Dink’s merry tribe, especially since, by this time, it is clear that her own family is in ruins — parents disagreeably divorced, sister in rehab.

In fact, Dink, Inc. is so much fun, we almost forget the doubtful morality of gambling, the details of which Raymer expertly parses in engaging and entertaining prose. “The first lesson I learned was that while it may be illegal to be a bookmaker, it is not illegal to gamble for a living,” she writes. “The second lesson was that despite the tens of thousands of dollars in bets he made each day, the money Dink bet was always his own.”

But things get progressively darker when Raymer moves to New York and Dink sets her up with a new boss, the 370-pound food-and-figures addict, Bernard. He is what Raymer calls a cannibalistic gambler. “Sixteen hours a day, seven days a week, he sat in front of his computers booking bets, making bets, calculating sixteen-team-if-reverse-round-robins in his head and taking advantage of the very large, very liquid, no-risk betting opportunities created by the Internet.”

After working for Bernard on Long Island, Raymer follows him to Curaçao when he decides to take advantage of loose regulations for Internet bookmaking in the Caribbean. There, the veneer of her new profession’s harmlessness rubs away, as do Raymer’s scruples. “Congress, criminal complaints, prison camps: these were just abstract words to me. The money was what stuck. The two-hundred-thousand-dollar days; the fifteen-million-dollar months. The numbers these men were netting were as supersized as their chauffeur-driven Hummers, eight-thousand-square-foot compounds, and Costa Rican girlfriends’ newly implanted double-D silicone breasts.” In a land where “prostitution was legal and McDonald’s delivered,” Bernard’s group believed they’d found paradise.

Bernard imports a crew of men from the States to round out the locals in his employ, and their domestic lives — grocery lists, dinner with the wife, kissing the kids good night — quickly invert as they adjust to a new workaday reality of wild sex with beautiful women, mountains of cocaine, and no rules. Raymer watches with a gimlet eye, reminding us that these aren’t just strung-out slobs or characters, but real men with real lives they are gambling away. When Bernard’s business implodes, Raymer returns to New York, determined to make a legit life — but gambling’s magnetic pull on her is too strong. She is soon working as a small-time bookie, sending her clean-cut Columbia University boyfriend on money drops and pickups. Of course this is all illegal, and when a customer can’t pay up, she realizes that she’s put the person she most cares for at serious risk.

Cue sappy music and the moment of change, right?

Not exactly. Throughout Lay the Favorite, Raymer rails against the cheats who steal from her bosses. In the end, Raymer makes a startling choice, one that involves a first-class plane ticket, a bikini, and fun in the sun with someone else’s money. The surprise is not so much the fact that she isn’t above corruption, but that she doesn’t seem to see the irony or tragedy in it.

One of many strengths of Raymer’s strange and beautiful book is the way her gaze cuts so deeply and cleanly into the hearts of her characters. Yet in the end, she doesn’t use that same laserlike vision on herself. Indeed, the thieving masseuse’s words about Raymer being “one of us” become prophetic.