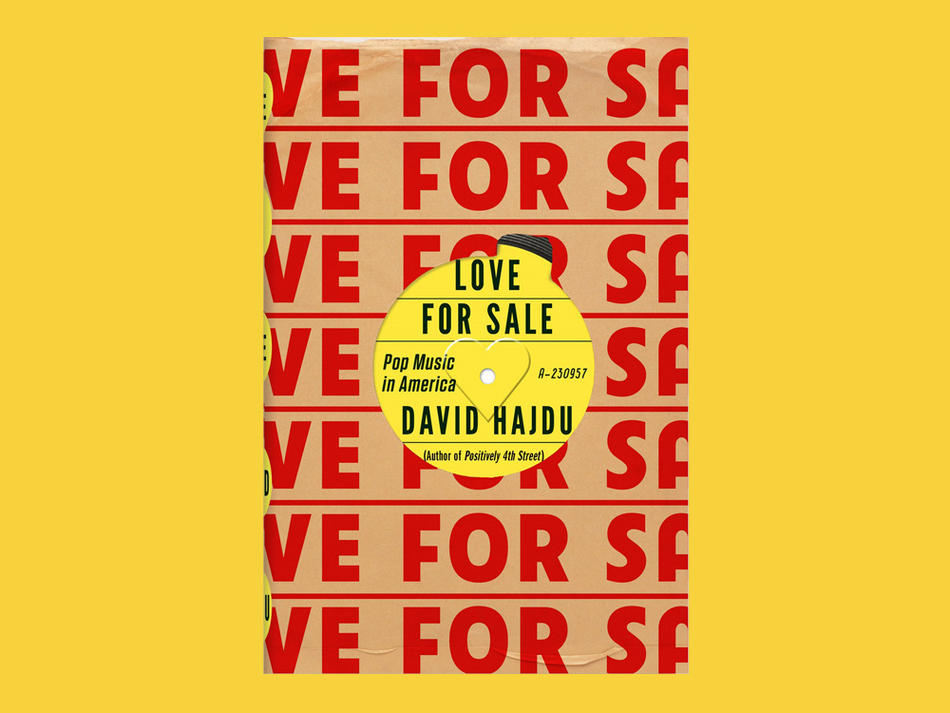 It’s an amorphous category that likely vexes more than illuminates. As David Hajdu writes in his new book, Love for Sale: Pop Music in America, the term “provides no information about the music itself: no suggestions of how it sounds or what sort of mood it might conjure, no indication of the tradition it grows from or defies, and no hint of whether it could be good for dancing, solitary listening, or for anything else.”

Still, as “a phenomenon of vast scale and intimate effect, a product of mass culture that reaches millions of people (or more) at one time and works for each person in a personal way,” it is worth examining. Hajdu is perfectly positioned to do so — in addition to teaching journalism at Columbia, he is the music critic for the Nation and the author of four other related books. In this history of popular music, he displays an encyclopedic knowledge of a deeply elusive genre.

From the first published song sheets to the development of blues and jazz, to the songwriters of the 1960s to the sequential rise of tapes, CDs, and MP3s, Hadju chronicles how the creation and consumption of music expanded outward from a core of professional gatekeepers to become a more democratic, open avenue for creative expression. Ultimately, Hadju proves that “what tends to matter ... is that pop artists say something legitimately their own, in their own manner. There’s something beautifully egalitarian and almost utopian in this, even when the music is less than exhilarating.”

Embedded within the roughly chronological history are countless delightful nuggets: a vest-pocket history of the Victrola; a cultural and social examination of Harlem’s Cotton Club, which was “elemental to the story of American popular music as a nexus of blackness expressed, imagined, demeaned, and exalted”; and an insightful discussion of the development of the blues as an art form: “the blues was intricately coded, with multiple, sometimes contradictory meanings and allusions decipherable only to the informed.”

Hajdu even dispels some misconceptions about the mythic Elvis Presley. While “thought of as an alpha source in rock history,” Hajdu writes, “he was an interpretive artist, a singer of material created by a professional class of composers and lyricists, rather than a songwriter.” In fact, Hajdu argues that Bob Dylan and Joan Baez were the first to really master both singing and composing. In 1966, the Kinks and the Beach Boys elevated the pop scene yet again with Face to Face and Pet Sounds, which “demonstrated striking levels of intellectual ambition and musical adventurism.”

The author saves two of the best chapters for last. “Punk vs. Disco” — “disco fed on homosocial optimism and hope; punk, nihilistic cynicism and despair” — crackles with the on-the-verge-of-violence energy of 1970s New York, and Hadju’s take on hip-hop — which “set and met aesthetic values of its own choosing — groove and flow, layering, rupture ... hip-hop was interested not in assimilation but in sovereignty” — is simultaneously astute and passionate.

Hadju’s scholarly chops are on full display in the book, but lay readers should not be put off. Hadju is a master of distillation and often cleverly weaves in personal anecdotes to lighten the scholarly tone. In one charming passage, he offers his opinions on the current music scene, and particularly, his son’s favorites. After all, claims Hajdu, “one generation’s rock and roll is, more than anything, a music that veterans of the preceding generation do not like, approve of, or grasp.” In other words, perhaps one way to define the undefinable pop music is this: if your parents hate it, it’s the real thing.