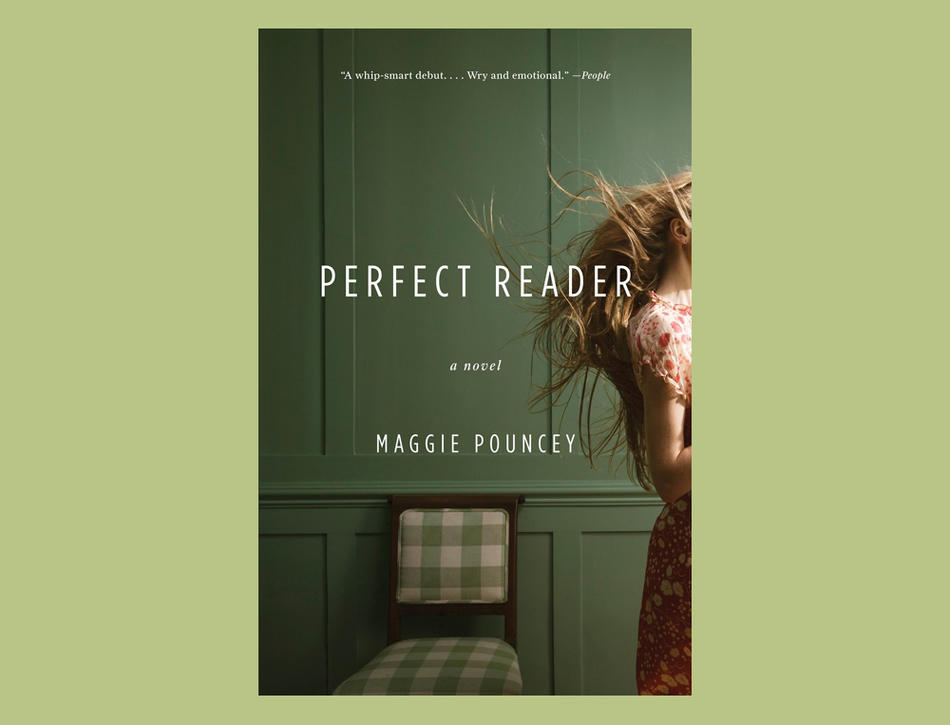 A parent dies. A child is left to sort through the remains of a life, both its treasures and detritus. Part of the challenge is to distinguish one from the other. What should we preserve? What must we discard? And who will we be when the task is done?

In Perfect Reader, an engaging first novel by Maggie Pouncey ’00CC, ’08SOA, Flora Dempsey confronts these questions after her father dies of a heart attack. An only child in her 20s, she finds herself the custodian of her father’s legacy, his material possessions, and even his dog, Larks — like it or not. And, as the novel opens, she isn’t sure she does.

Flora grew up worshipping her father, but after her parents’ marital split, their relationship became occasional and strained. A literary critic and the former president of Darwin College, Lewis Dempsey was a hard act to follow. So Flora didn’t even try. When she was old enough to choose, Flora rejected Darwin in favor of the big city three hours away. She sees the denizens of the college town as “self-satisfied but not content.” The place, she thinks, is “thick with academics and their broods — idlers, ruminators, moseyers.”

Pouncey knows both the cloistered world of academe and child-of-divorce territory from the inside: Her father, Peter Pouncey ’69GSAS, was dean of Columbia College from 1972 to 1976 and later was president of Amherst College, the apparent inspiration for her alternately cutting and affectionate portrait of small-town college life. Pouncey’s mother, Susan Rieger ’76LAW, is a former Yale dean and now associate provost of Columbia’s Office of Equal Opportunity and Affirmative Action.

After her father’s death, Flora quits her job at a magazine to return to Darwin. This is where we find her, occupying his house, stumbling into his friends and enemies, searching the traces of his life for a usable past and perhaps some clue to her own future.

And yet Flora is nothing if not avoidant. Her move to Darwin seems clumsily abrupt. Why not take a leave of absence? And why cut herself off from her well-meaning city friends? Grief can be isolating, but the completeness of Flora’s escape to Darwin, where she won’t even answer the perpetually ringing phone, seems improbable in this age of e-mail, text messaging, and cell phones.

Flora’s avoidance, on which much of the plot depends, extends to her relationship with her father’s work. During their final breakfast, months before his death, Lewis had handed her a sheaf of poems — “appallingly rough,” he said, “but with some good bits” — and pronounced her “the reader I trust most.” It’s an extraordinary compliment that might well have soothed years of hurt feelings.

Flora nevertheless delays reading the poems, even in the immediate aftermath of his death. This strains both credulity and reader sympathy. Whatever her ambivalence toward the man, wouldn’t simple curiosity have caused her to read the work? But this tic is consistent with Flora’s character. In fact, we learn, she has scrupulously avoided reading any of her father’s writing — not his scholarly books or his regular reviews in The New Republic.

This defense seems to paper over a fear of not measuring up. But it turns out that Lewis had disappointments of his own. Being a critic — Thomas Hardy’s verse was his specialty — was never his passion. “He had wanted to be the poet, and not the poet’s ideal reader,” Pouncey writes, “but had taken the safer route. And had been dissatisfied all those years on the wrong side of the words.”

Now, Lewis has named Flora his literary executor, and the fate of the poems rests with her.

As Flora encounters her father’s late-life lover, his lawyer, and his archrival, she broods on her own childhood loss of innocence, an incident involving her best friend. The details gradually emerge in the course of the third-person narration, which hews to Flora’s point of view and switches between past and present. (The present-day story interested this admittedly imperfect reader far more.)

Pouncey’s book is moderately fast-paced and fun to read. Its characters are persuasive composites of generosity and pettiness. And the central metaphor of the perfect reader evokes our staggeringly imprecise knowledge of the people closest to us. As Pouncey writes, “We saw so little, so wrongly, with the people in front of us, and yet with words on a page, we fooled ourselves that we could get it right.”

Flora wrestles with these errors of understanding. And she experiences the ambivalence common to executors as they riffle through their parents’ archives, filled with beribboned love letters, photographs, evidence of ancient family disputes, and perhaps even unfinished literary masterpieces. This is territory achingly familiar to anyone with a dead parent and an attic. “We want to know our parents’ secrets, their lives before and beyond our own,” Pouncey writes. “But then to know can be terrible. To know is to want to not know.”

Not always, and not necessarily. It is true that to know one’s parents better, to rub up against their youthful ambitions and their middle-aged regrets, can be a tender, heartbreaking process. It will likely bring tears and regrets of its own. But it is also a great gift. In Perfect Reader, we sense that Flora Dempsey, over time, will come to realize that.