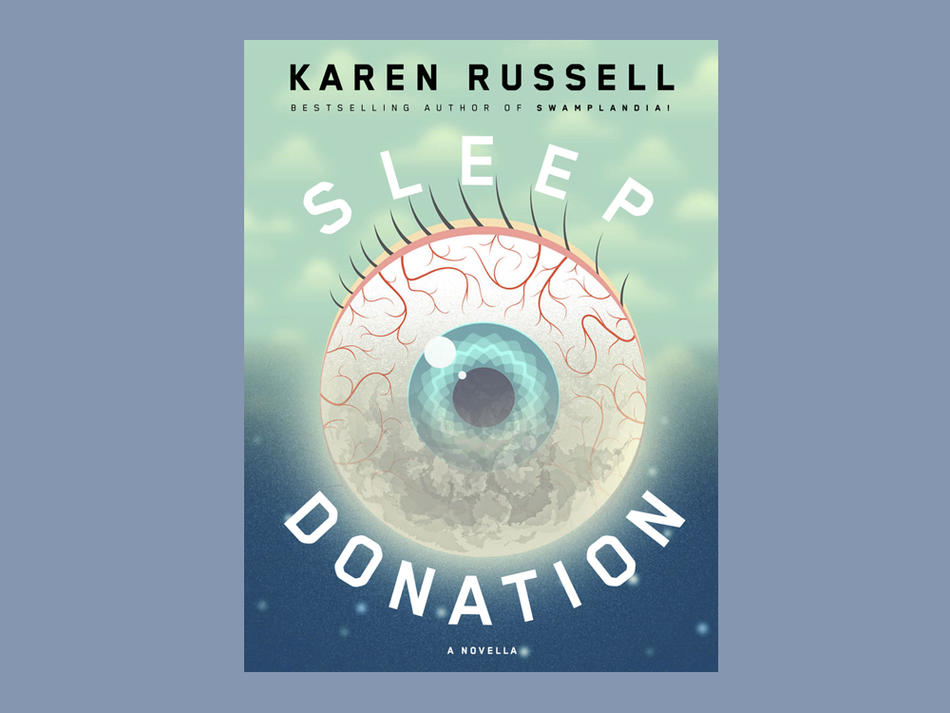 When was your last full night of deep, unbroken sleep? If you’re lucky, your answer to this question, which comes near the beginning of Karen Russell’s novella Sleep Donation, will be a prompt “last night.” It’s more likely, though, considering that the Centers for Disease Control have declared insufficient sleep a health epidemic, that your answer is not last night, not even last week. It’s likely that you’re so sleep-deprived, in fact, that you can barely remember your own address, let alone the last time you slept enough to wake up feeling rested and refreshed. Which is why, for most of us, Sleep Donation will read like a horror story.

In Sleep Donation, Russell ’06SOA imagines a world in which the insomnia epidemic has turned fatal. It’s the near future, and thousands of Americans have permanently lost the ability to sleep. The landscape is dotted with Night Worlds, carnival-like encampments where the sleepless spend their restless nights. Insomniacs stare from moonlit windows with “pink-spoked eyeballs.” Emergency rooms turn away the chronically sleep-deprived, sending them home “to twist in exile on their mattresses.” The only treatment is a sleep donation, an infusion of sleep harvested from the dreams of a healthy person. But demand far outstrips supply. Soon, the scientists predict, “sleep will go extinct. And eventually, unless we can find some way to synthesize it, so will we.”

It is easy to get so taken by Russell’s spooky-accurate description of what lack of sleep can do to a body, and a country, that Sleep Donation starts to feel like speculative journalism. There’s far more to this slim book, though. Trish, the narrator, lost her sister to insomnia and now works for a sleep center called Slumber Corps, cold-calling potential sleep donors. Her special gift is reliving her sister’s death with fresh, raw grief each time, “evergreen … a pure shock, the freshest outrage.” The performance is superbly effective at eliciting donations, but at what cost?

Though Russell meticulously describes the intricacies of the epidemic and the protocol for donating sleep, she stops short of detailing what, exactly, is being taken from a donor when he or she lies down on the “catch-cot” for a “draw.” She tells us just enough that we know there’s something unmistakably unsavory about the process, which feels like a more fundamental invasion of privacy than giving blood or even donating an organ. There is the sense of an ethical breach — otherwise, why would Trish have to turn on the waterworks to recruit donors? Taking someone’s dreams feels dirty, like spying on someone in the shower, even if they’ll never know you looked.

As in Russell’s previous books, Swamplandia! and St. Lucy’s Home for Girls Raised by Wolves, everything feels a bit off, suggesting that humanity has fallen out of sync with the planet’s natural rhythms. In Sleep Donation, “time itself will soon become an anachronism.” Even the fleshy white flowers outside a donor’s house are freakish in their abundance, while the trees seem “to have too many limbs, mutating away from the rooftops in a silent, wild freedom.” The sense of impending annihilation pulses throughout the book; insomniacs describe the final throes of their condition as their Last Day, evoking religious cults and doomsday prophecies.

At the same time, Russell leavens the apocalyptic with the familiar. The homeyness of the details — a donor’s “brown sedan with faded turquoise doors,” a tired new father “with his house-musk of baby powder and Old Spice” who looks, when he burps his baby, like “a gentle, enormous beaver” — keeps the story grounded in reality. A family dresses their daughter in frilly dresses for her sleep donations, and you don’t think, Wait a minute, exactly how is the machine supposed to be capturing the little girl’s dreams? You think, Of course the parents put her in her Sunday best for this important event, despite the fact that she will snooze right through it.

Storytelling is at the heart of Sleep Donation: the story Trish tells potential donors about her sister’s death; the story Trish’s bosses tell her to convince her to keep doing her job; the story she tells herself about them, to quell her doubts. There are the stories insomniacs tell one another to pass the sleepless hours at the Night Worlds. In many ways, the entire novella functions as a sort of twisted bedtime story, something children might tell each other to scare themselves into staying awake. It seems more than coincidental that Sleep Donation, is the first title published by Atavist Books, is being released exclusively for e-readers and phones. The rise of insomnia has been linked to the proliferation of electronic devices, and as you lie in bed reading Sleep Donation, your phone casting a sterile little cone of light in an otherwise darkened bedroom, you can’t help feeling that you’re pushing your luck. You really should turn off the phone and get some sleep, while you still can.