Book Review: "All Our Names" 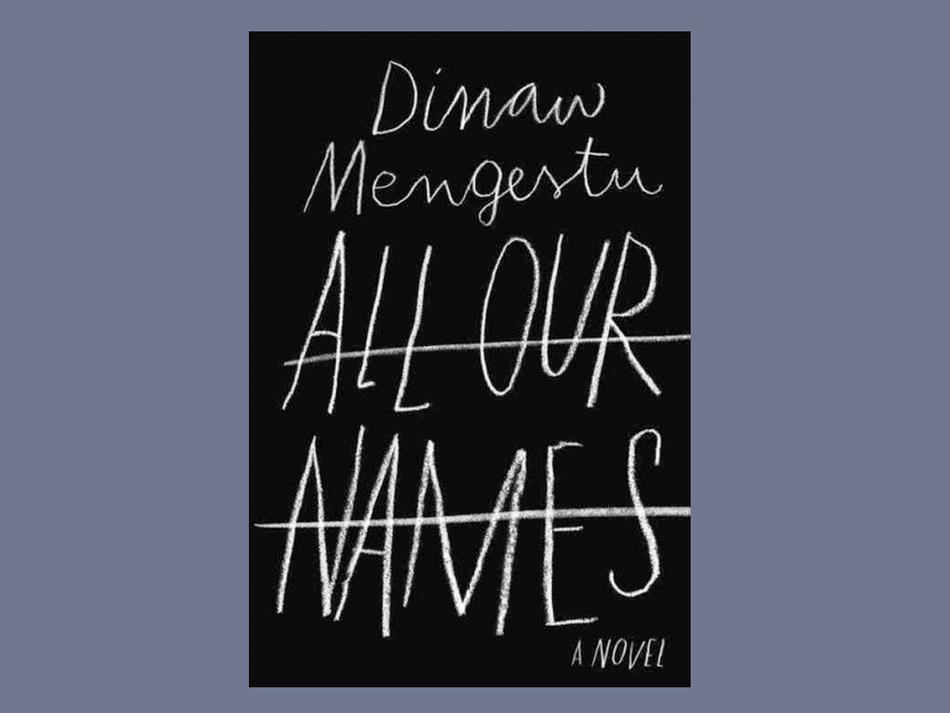 When a friend said she’d picked up All Our Names, then put it down, finding it “generic,” I covered my ears, but the damage had been done — that night, when I returned to the novel, the word generic floated before my eyes like a scrim. I’d been devouring the book, but now I was filled with doubt. Were not the characters opaque? Was not the landscape indistinct? Was not the plot itself wan, almost anemic? Even as I kept reading, I had to admit: yes. My friend was right. Many aspects of the novel could be described as generic. But I soon realized that it was intentionally so, and that its lack of specificity was part of its brilliance.

All Our Names, the third book by the Ethiopian-born, Mac-Arthur grant winner Dinaw Mengestu ’05SOA, explores themes of immigration and the search for identity through the twin stories of a displaced African fleeing his country’s civil unrest in the 1970s and a Midwestern social worker who falls in love with him. But it’s also about what it means to write, an art that depends on specificity, when your physical and emotional survival depends on specificity’s opposite: the suppression of details about your name, your country, what you saw and did, and what was done to you as you sought escape. How, the book asks, can the narrator create a history that is generic enough to save his life without erasing himself altogether?

The novel opens with the African narrator shedding his birth name as he arrives in Kampala, which he refers to as simply “the capital,” because Kampala “belonged to Uganda, but the capital, as long as it was nameless, had no such allegiances.” At the local university, where the narrator impersonates a student, he meets Isaac, who christens him “the Professor”; Isaac renames all the wealthy students “Alex,” interchangeable faces at an unidentified school in a nameless capital. Proper nouns, like all identifying details, are dangerous. Unlike Isaac, who has come to the capital to be a revolutionary, the narrator wants to be a famous writer. His first published work, a tongue-in-cheek list of “Crimes Against the Country,” contains its own negation: “It is a Crime Against the Country to read this.”

The students’ revolution becomes a real revolution (though since we never learn the name of the president or the exact year, it’s hard to know whether it corresponds to a historical one), with Isaac as a lieutenant and the narrator his uneasy ally. Even events the narrator witnesses firsthand have a murky ambiguity: Isaac provokes some “Alexes” sitting outside a café into beating him up, then re-appears on campus, flaunting his injuries. “I imagined him, as an old man, pointing to an old wound on his hand or his face, and saying, ‘This one came from the police,’” the narrator says. “Or, ‘This one I can’t remember anymore. I have so many on my body.’”

The narrator soon sees the utility of this willed forgetting. Walking through an unfamiliar neighborhood with a newspaper under his arm, he is attacked and beaten unconscious. “My memory of what happened after the paper was taken has never returned; if parts ever did start to emerge, I would do whatever was necessary to keep them buried.” The narrator is taken to a hospital, where Isaac visits him, bringing him a blank notebook to write in, saying, “Now you know what it feels like,” meaning, now he can be trusted to tell both their stories.

Mengestu explored similar ideas about the trickiness of transforming personal experience into historical narrative in his previous novel, How to Read the Air. In that book, the main character differs from the narrator of All Our Names in that he can’t stop telling stories about immigrants’ experiences. But he, too, struggles with the truth; the stories he tells are lies. In both books, the narrators’ audiences are complicit in the acts of fabrication and obfuscation. All Helen, the social worker in All Our Names, knows about the narrator is that “he was from somewhere in Africa, that his English was most likely poor . . . and his life may or may not have been in danger,” and that may be all she really wants to know: “Just as I had wanted him to talk, I needed him to stop.” It is easier for Helen that the narrator remain a generic immigrant, in the same way it is easier for the narrator to present himself that way.

Helen may never know the extent of Isaac’s story, but we, as readers, do. Mengestu pulls off a sly authorial sleight of hand, for though the narrator insists he does not have the words to describe the brutal, hopeless denouement of the revolution, he brings it to life on the page: “I tried to write down what had happened. I thought of counting the dead, but I was too far away to do so. I tried next to describe one of the bodies, but all I could see was death . . . When that failed, I tried to describe a woman dragging what looked to be an old man through the grass, but before I knew what to write, she was gone, and then walking back, empty-handed.” In the end, he only fills six pages of the notebook Isaac gave him, four with maps, which, he says, are “far from poetry, less than a journal, and worthless as history.”

As the narrator prepares to leave Africa, Isaac gives him two gifts: a Kenyan passport, enabling the narrator to assume Isaac’s identity, and a new, note-filled journal: “He had made a better record of our lives together than I had ever done,” the narrator says, though of course he is the one who will go on to write the story we’ve just read. Isaac also has made an addition to the list of Crimes Against the Country: “It is a Crime Against the Country to forget this happened.” This tension between memory and forgetting, between history and oblivion, between the specific and the universal thrums through the book like a heartbeat, anything but generic.

Top Stories
The Simple Questions That Can Prevent a Suicide
The Troubling Legal Implications of Overturning Roe
How the Mankiewicz Family Got Their Hollywood Ending
Lets Talk About Sex on YouTube
Book Review: Horse
All categories >
Read more from Jennie Yabroff '06SOA