Ghost Upon the Floor 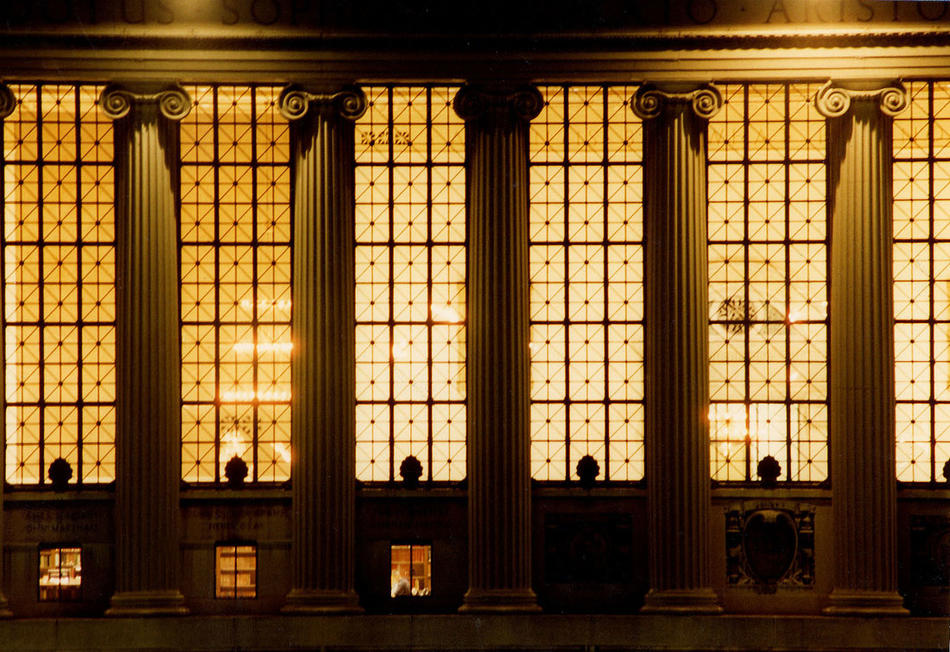 On the mezzanine level of an office on the sixth floor of Butler Library, amid files and boxes, shrouded from the public eye, there stands a black wooden 19th-century mantelpiece. The front is decorated with elegant neoclassical details. The paint is chipped in spots. The mantel no longer frames a fireplace, nor is it surrounded by purple curtains and a bust of Pallas. Few people know it even exists.

The mantel first came to the attention of Columbia on December 21, 1907. That morning, Charles A. Nelson, the University librarian, opened his copy of the New York Times and saw a letter in the Saturday Review of Books that stirred his interest. The letter, from William Hemstreet of Brooklyn, offered a mantelpiece to a public institution on the condition that the relic be prominently displayed and preserved. By 9 a.m., Nelson was on the phone with Mr. Hemstreet, pleading Columbia’s case.

Nelson coveted the mantel because of its history, and the history it had witnessed.

In the 1840s, the mantel was located in a farmhouse belonging to the Brennan family on the bucolic Upper West Side, in the vicinity of what today is the intersection of West 84th Street and Broadway. In 1844, a new boarder came to the farmhouse. He was a struggling poet who occupied a small room on the second floor with his wife. The furnishings in their room were simple and included an unassuming mantelpiece bracketing the fireplace. During his stay there, the poet wrote what would become his most famous poem.  He composed in the glow of the hearth. The fireplace, which provided him with warmth during the cold winter months, also made its way into the poem: Ah, distinctly I remember it was in the bleak December, / And each separate dying ember wrought its ghost upon the floor. Other aspects of the room also appear in the manuscript: “’Tis some visitor,” I muttered, “tapping at my chamber door / — Only this, and nothing more.” It was in that chamber, behind that door, that Edgar Allan Poe composed “The Raven.”

In 1888, when the Brennan farmhouse was being torn down, Hemstreet went to see what could be salvaged from this former residence of Poe, who had died in 1849. When Hemstreet reached the poet’s room, he found the mantelpiece and the chamber door still intact. Unable to carry more than one heavy item, Hemstreet had to decide fast. Whatever he took with him would be saved, while everything else would be lost when the house was razed. Hemstreet, for reasons that remain unclear, chose to save the mantel, leaving the chamber door, which figured more prominently in the poem, to end up in splinters. He took the mantelpiece back to Brooklyn and placed it in his personal library, where it remained for nearly two decades.

Nelson wasn’t the only respondent to Hemstreet’s 1907 letter. Organizations from Norwich, Connecticut, and Atlantic City, New Jersey, vied with more prominent institutions, including the University of Virginia, for what the Times called “The Raven Mantel.” The mantel was extremely desirable because Poe’s star was rising.  According to the Times, “The growing interest in Poe gives [the mantel] an ever-increasing value, and the next generation will doubtless put an even higher estimate on Mr. Hemstreet’s forethought than will the present.” Around the same time, the New York Shakespeare Society referred to Poe as “our American Shakespeare.”

Columbia University president Nicholas Murray Butler personally assured Hemstreet in a letter that the Raven Mantel would be “appropriately placed and sedulously cared for.” Hemstreet accepted Butler’s guarantees and presented the mantel to the University on January 4, 1908.  The mantel was accompanied by documents that testified to its having been in Poe’s room and having witnessed the composition of “The Raven.” The mantel was placed in Low Library, where it remained until 1974, when it was transferred to Butler Library. There it rests today, in a solitude that would have surprised the Times writer who, in 1907, predicted that at Columbia the mantel “would be visited by thousands to whom in any other place it would be inaccessible.”

Although this prophecy has yet to be fulfilled, the mantelpiece has survived for more than 150 years, and is now a part of Columbia’s Edgar Allan Poe collection, which also includes an original manuscript of “Annabel Lee” and a facsimile manuscript of “Epimanes,” an unpublished Poe tale. From time to time, a Poe scholar ventures into Room 655 to regard the Raven Mantel, just as the poet himself did, in the saintly days of yore.