A freshman beanie from 1925. A briar “class pipe” from 1911. A collection of Columbia songs dating from the 1750s. An 1899 yearbook with a modern-looking minimalist design of Low Library giving way to a rippling blue tide.

In the library of the new Columbia Alumni Center on 113th Street, the past is always present: More than a century’s worth of yearbooks and assorted histories, arranged in wood-and-glass cabinets, provide the backdrop for rotating exhibitions of Columbia memorabilia. The inaugural exhibition, open through October 23, features 1930s covers from Jester, Columbia’s student humor magazine, along with other material from the collection of Paul Neshamkin ’63CC. Also on view are photos and artifacts from the Columbia University Archives, including artwork by Paul’s father, Oliver Neshamkin ’35CC, ’37GSAS, who was involved in both Jester and the Spectator.

The Jester covers, seen here, are a marvel of design sophistication. With their sharp angles and controlled colors, they stack up well to New Yorker covers of the era. Particularly notable are the illustrations by future abstract expressionist artist Ad Reinhardt ’35CC, who became Jester’s editor in chief in 1934. His covers are a revealing precursor to a celebrated career.

“We’re showing material from Columbia University Archives — where archivists Jocelyn Wilk, who co-curated the exhibit, and Susan Hamson have been of great help — and from alumni collectors like Paul Neshamkin,” says Jerry Kisslinger ’79CC, ’82GSAS, who is curating the library’s collections and exhibitions. “This library is quickly becoming part of the Columbia alumni experience.

“Even though Columbia has one of the longest histories of any college in the country, for a variety of reasons that history has often been difficult for alumni to see,” says Kisslinger, executive director for communications in the Office of Alumni and Development. “We’re excited to bring alumni face-to-face with materials that, in their own way, tell Columbia’s story and connect us to the past. The Jesters certainly do that.”

But, as Reinhardt reminds us, publishing a magazine — even one of jokes and satire — isn’t all fun and games. In a 1934 Jester editorial, Reinhardt writes, “The fool doesn’t know yet exactly what he intends to do — he’s had great difficulty in putting this issue to press in less than 2 weeks.”

Like Reinhardt’s words, the exhibition serves as a reminder of what it means to be a student at Columbia. 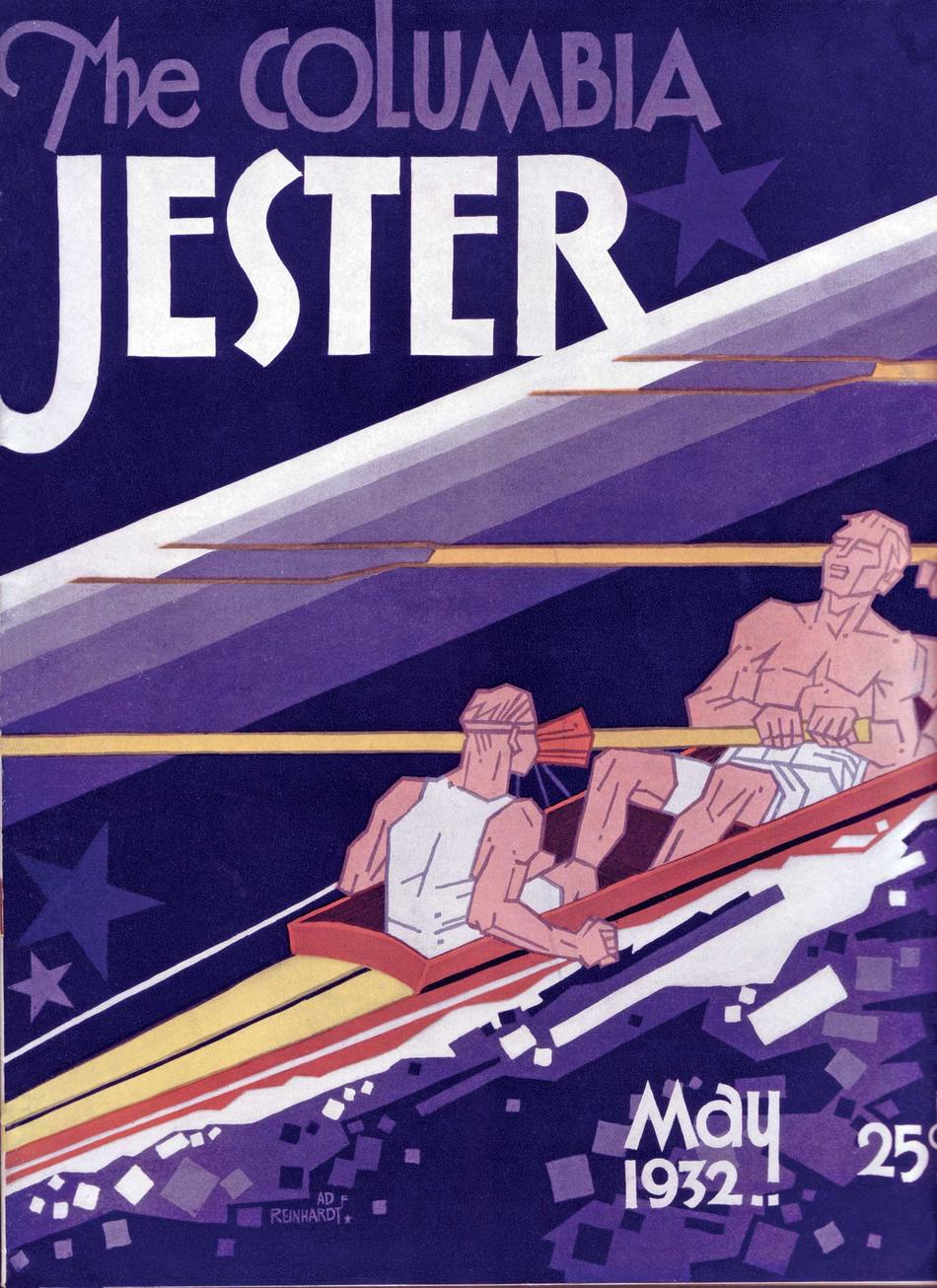 The November 1931 Jester celebrated the previous month's opening of the George Washington Bridge. The Artist is unidentified. 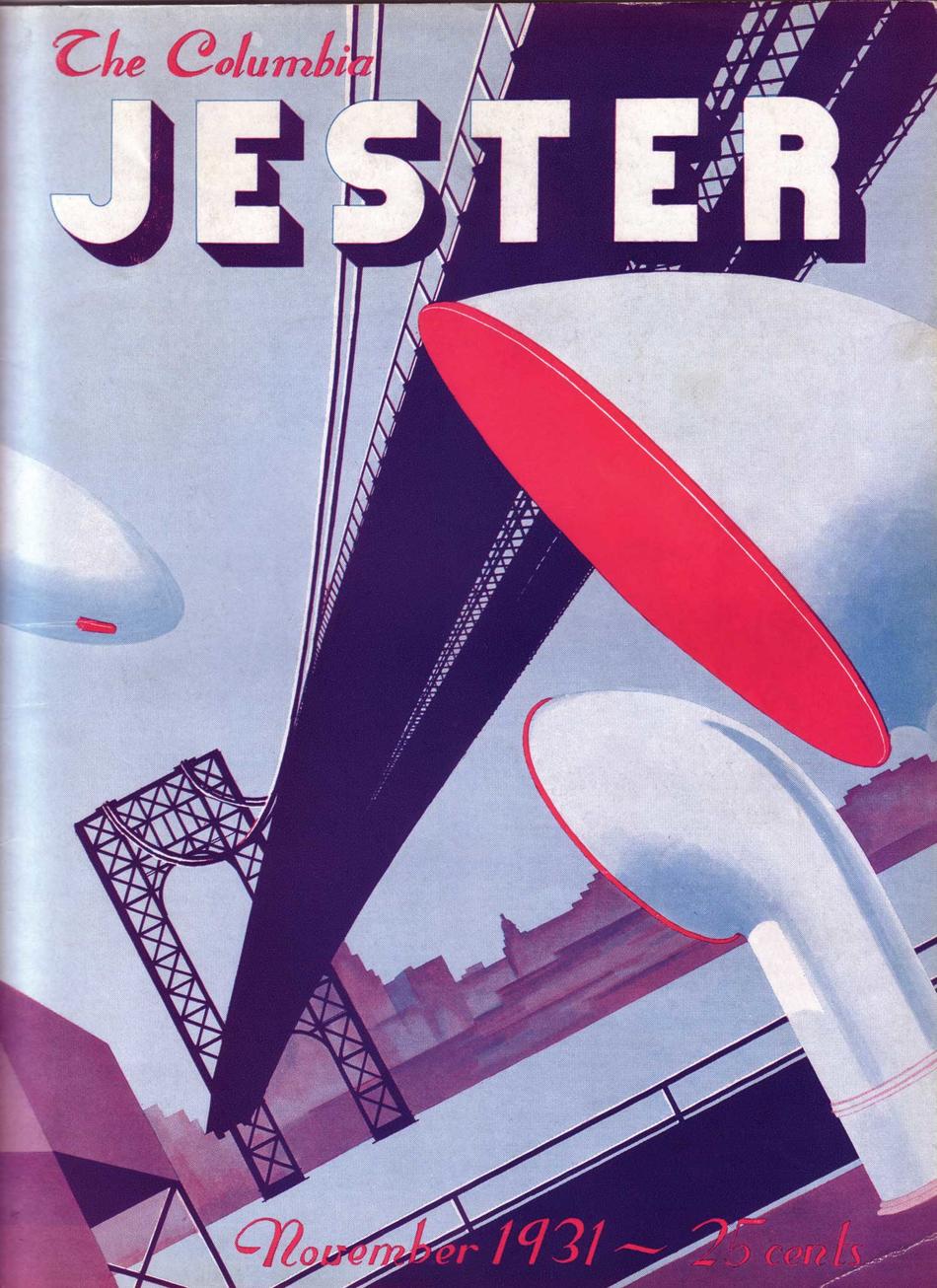 Ad Reinhardt put Columbia's lion in a football helmet for the November 1933 Jester. (Several of the magazines were trimmed around the edges when they were sent to the bindery long ago.) 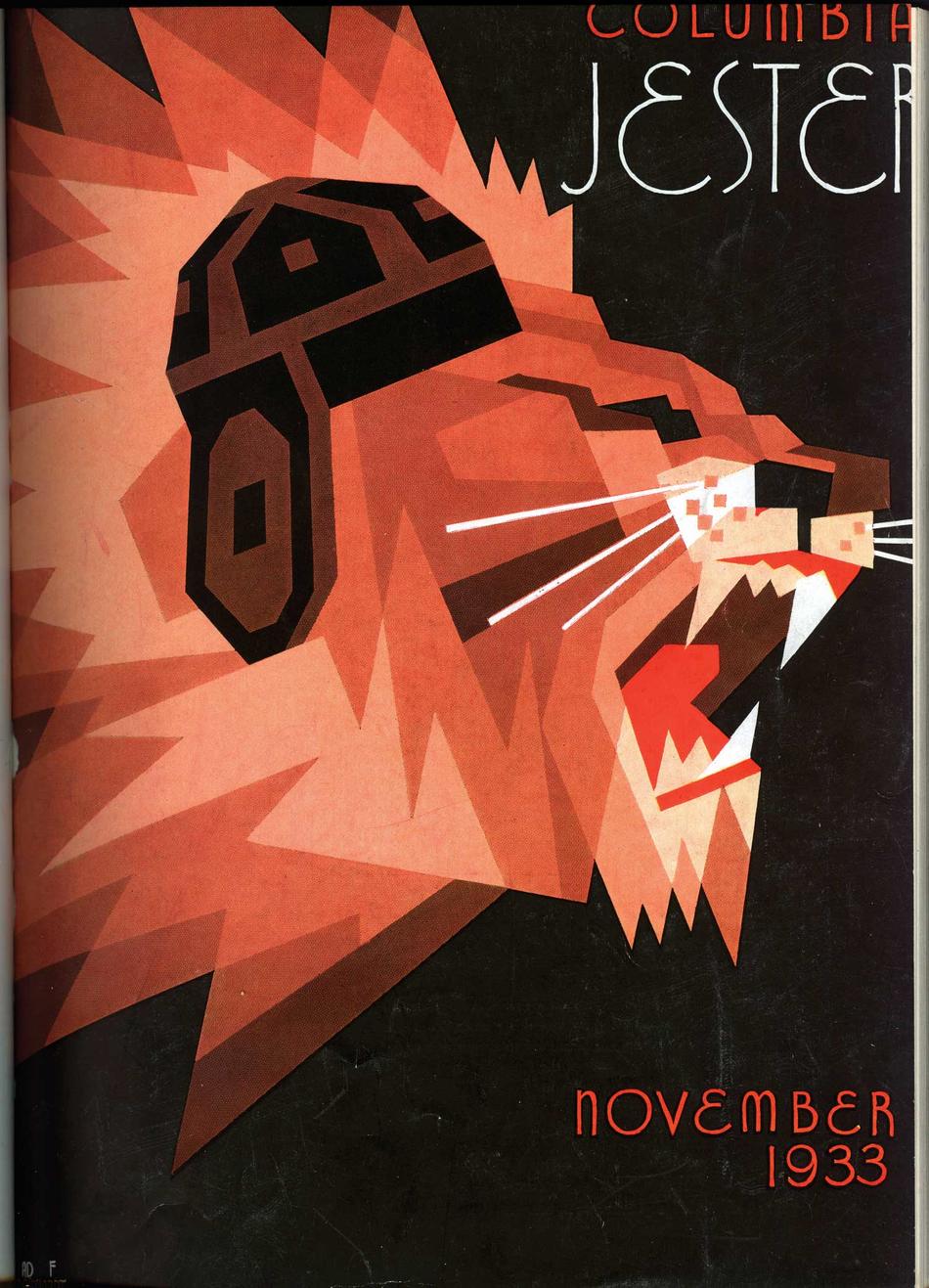 The February 1934 issue features "Campus Slants" by Cliff Montgomery '34CC, captain of the Lions team that won the 1931 Rose Bowl, and Arnold M. Beichman '34CC, '74GSAS, who went on to become a journalist and who is now a visiting scholar and research fellow at the Hoover Institution. 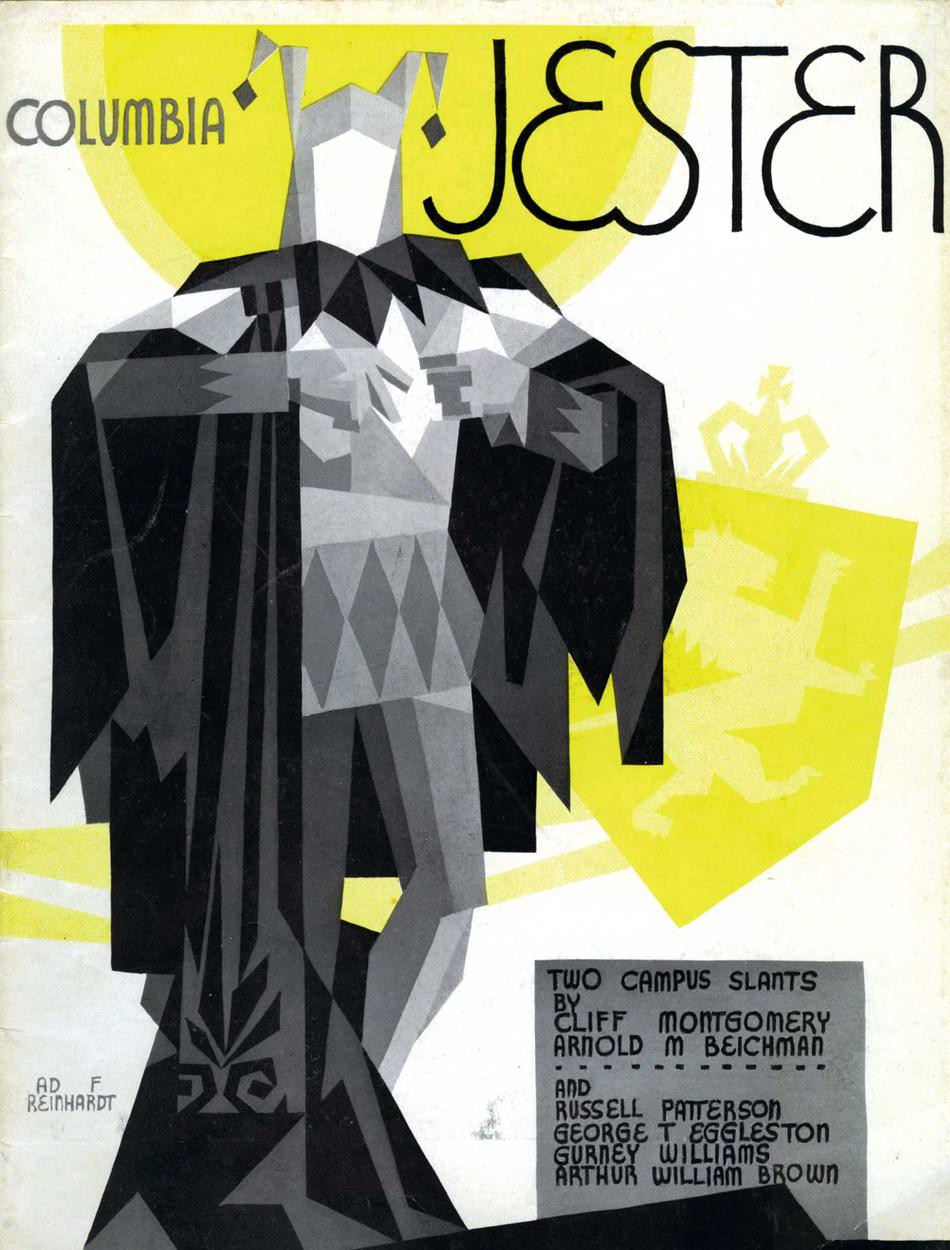 The March 1935 Jester, with a cover by Ad Reinhardt, served as the program form the 1935 Varsity Show, held at the Hotel Astor. 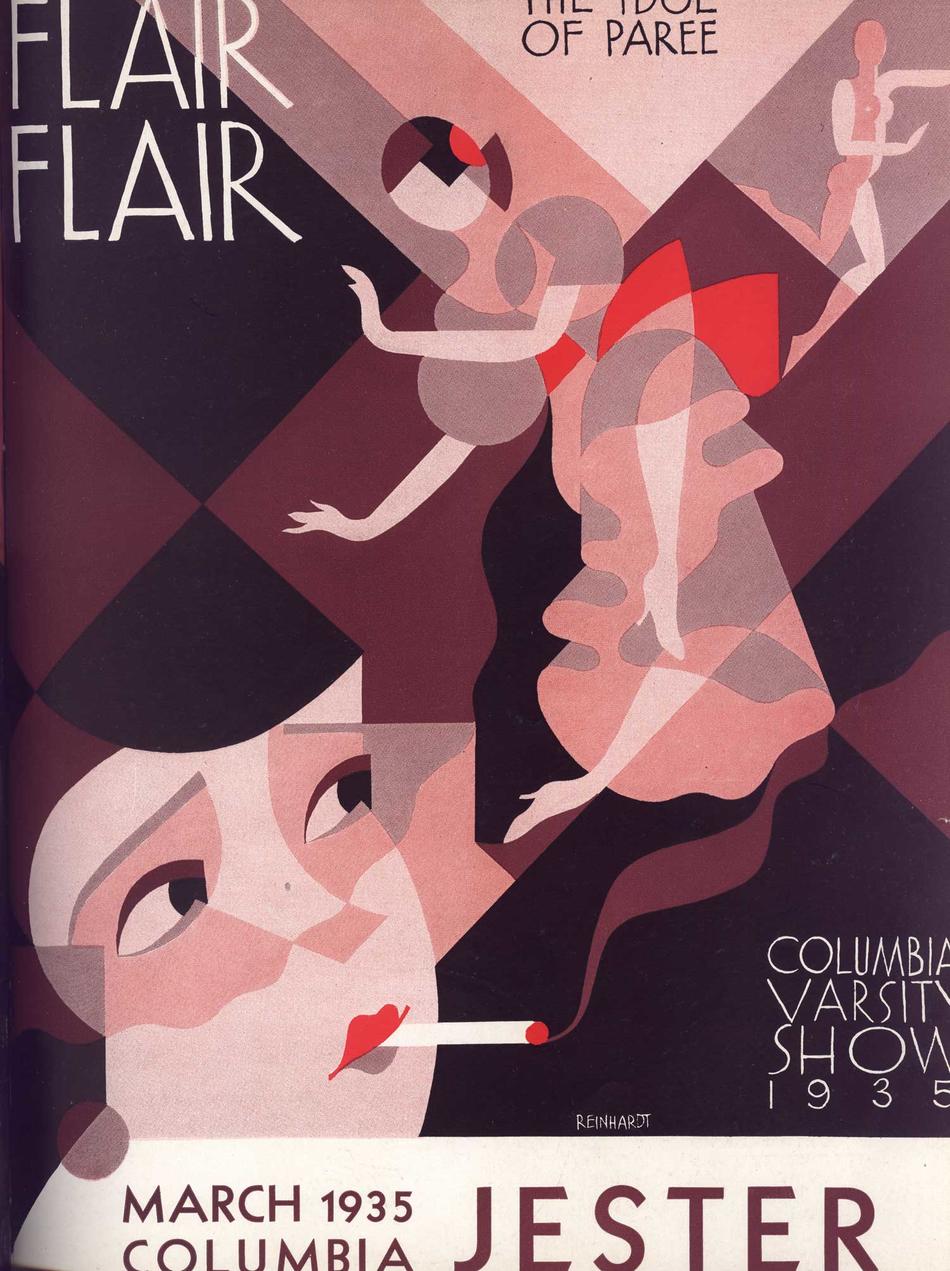 Read more from Allegra Panetto '09BC

Top Stories
Book Review: Horse
Can the World’s Religions Help Save Us from Ecological Peril?
What Declassified Government Documents Reveal About America’s Dark Secrets
Is Objectivity in Journalism Even Possible?
Learning to Live with the Voices in Your Head
All categories >
Read more from Allegra Panetto '09BC