In the documentary Theater of Thought, scientist Rafael Yuste explores the intersections of privacy and neurotechnology with filmmaker Werner Herzog.

Rafael Yuste, a professor of neurobiology at Columbia, wants to be clear: the astonishing advances in neurotechnology, which he defines as “methods or devices or tools to record or change brain activity,” are a wonderful thing. Whether electronic, optical, acoustical, magnetic, or chemical, neurotechnology is being deployed to treat brain disorders from depression to Parkinson’s and could someday be applied to Alzheimer’s and schizophrenia — and Yuste is thrilled. “My life’s quest,” he says, “is to understand the brain and help treat brain diseases through the development of neurotechnology.”

Over the past decade, as highlighted in Werner Herzog’s new film Theater of Thought, for which Yuste served as chief scientific adviser, neurotechnology has gone to places once unimaginable. By recording and mapping brain activity, researchers are gaining the ability to decode speech based on neural patterns, which could benefit people who are immobile or cannot easily communicate. At Columbia, Yuste’s lab is working on optical neurotechnology to understand the cerebral cortex, the largest part of the brain. Using holography, the lab team can activate neurons that serve to “implant” images into the visual cortices of mice — who behave as if they are seeing the image.

But these advances in the name of science and medicine come with risks of misuse, and Yuste wants to get ahead of this speeding neurotechnology train as it hurtles toward an unregulated future.

In his ninth-floor office in the Northwest Corner Building, Yuste, who was born in Madrid and has taught at Columbia since 1996, looks out his window at the brick building below — Pupin Hall, where, in the late 1930s and early 1940s, Columbia physicists worked on the Manhattan Project, the US research effort to create nuclear weapons. “The physicists who built the atom bomb were the first ones to argue for regulating how atomic energy should be controlled,” Yuste says. Today, he and his colleagues are arguing for regulating neurotechnology “because there are fundamental ethical and societal issues.”

It all began in 2011, when Yuste and a small team of scientists proposed what became, two years later, under President Barack Obama ’83CC, the BRAIN (Brain Research through Advancing Innovative Neurotechnologies) Initiative, a federal science program that allocated millions of dollars to hundreds of labs in the US to investigate how neurons and neural circuits interact to give rise to thought. The goal was to provide a basis for therapies for mental and neurological diseases, and, Yuste says, to spur an economically promising new field: neurotechnology. Other countries started similar projects, and in 2016 the US State Department, in conjunction with the UN, launched the International Brain Initiative, in which Yuste also played a key role. A subsequent meeting took place at Columbia in 2017 in a room down the hall from Yuste’s office, where twenty-five experts from around the world — scientists, engineers, ethicists, lawyers — wrestled with the potential abuses of neurotechnology.

“We decided that this is a human-rights issue,” Yuste says. “Neurotechnology can read and change brain activity, and so we proposed the idea of  ‘neurorights’ to protect brain activity from ill-intended purposes.”

They hammered out five neurorights that they want to see universally adopted: the right to mental privacy, so that our brain data cannot be used without our consent; the right to free will, so we can make decisions without neurotechnological influence; the right to personal identity, so that the technology cannot change our sense of self; the right to protection from discrimination based on brain data; and, not least, the right to equal access to neural augmentation. “Mental augmentation should be in the forefront of the human-rights debate,” says Yuste. “We’re talking about the possibility of creating a hybrid human, which could divide humanity into two species: augmented and non-augmented.”

The group published a paper in Nature, and Yuste founded the NeuroRights Foundation, a hub for advocacy, research, and international outreach, run out of his lab. So far, the foundation has advised Chile on amending its constitution to make the protection of brain data a basic human right. Yuste hopes other countries will follow and is pushing for the UN to revise its human-rights treaties to account for neurotechnology.

He is also bringing the message to the public. In 2020, he e-mailed filmmaker Herzog, whom he didn’t know but whose searching approach to enigmatic, existential topics struck Yuste as a good fit for neurotechnology. Herzog agreed. The two began talking over Zoom, and in May 2021 they traveled the US and collected some thirty interviews with neuroscientists, engineers, philosophers. Theater of Thought premiered at the Toronto International Film Festival this past September.

But Yuste’s work is just beginning. He wants nothing less than global protection for what he calls “the ultimate privacy” — our interior lives.

“We should draw a line in the sand that can’t be crossed,” he says. “The mind is the sanctuary of our innermost selves, and that private world must be protected.”

This article appears in the Winter 2022-23 print edition of Columbia Magazine with the title "What Do We Want? Neurorights!" 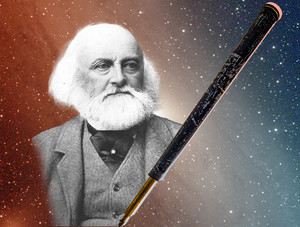 The Columbia Telescope That Changed How We See the World

Why the Rutherfurd Telescope is legendary among astronomy aficionados