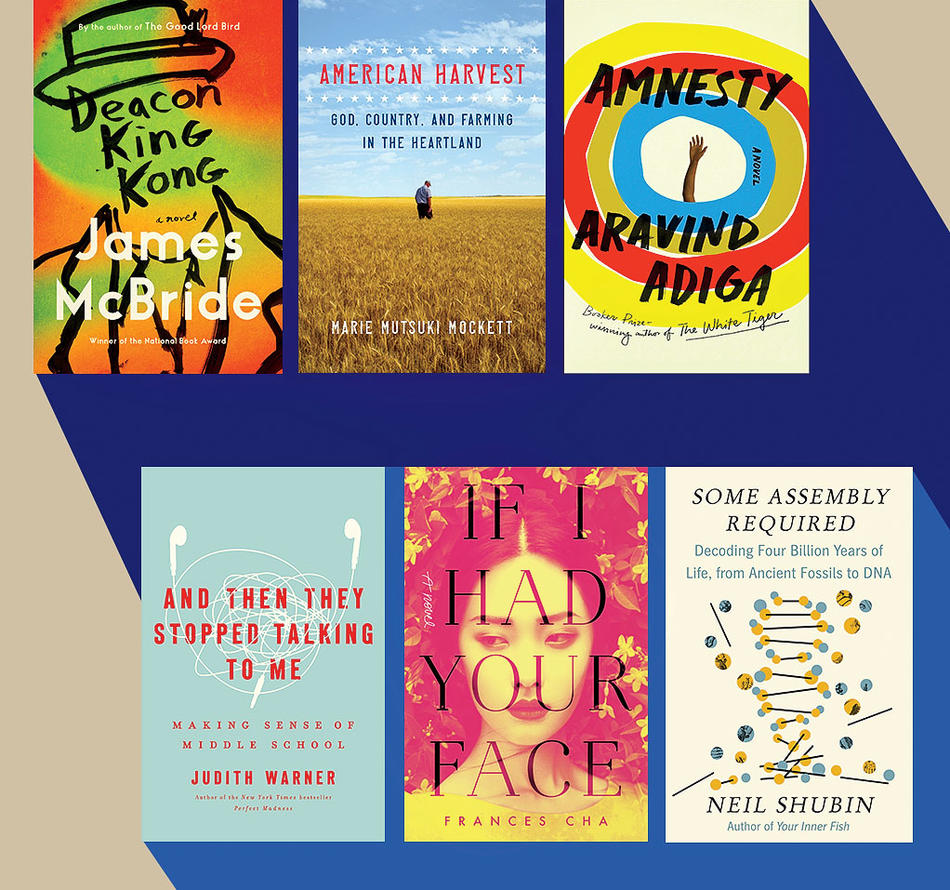 Deacon Cuffy Lambkin — or Sportcoat, as he’s known around his Brooklyn housing project — is a “walking genius, a human disaster, a sod, a medical miracle, and the greatest baseball umpire that the Cause Houses had ever seen.” But one evening in September of 1969, Sportcoat shoots the project’s biggest drug dealer, setting in motion a convoluted (and often hilarious) chain of events. Sportcoat is one of James McBride’s most memorable characters, and the world that he inhabits is richly, perfectly drawn.

What happens when an undocumented immigrant must decide between his own fate and the common good? Danny (born Dhananjaya Rajaratnam) is a Sri Lankan refugee living a quiet life as a housecleaner in Sydney, Australia. Then he learns that one of his clients has been murdered, and Danny might have information that could lead police to her killer. But if he comes forward, he risks immediate deportation. With his latest book, Aravind Adiga — the Booker Prize–winning author of The White Tiger — creates a fascinating parable that exposes some of the unintended consequences of draconian immigration law.

Marie Mutsuki Mockett has spent most of her life on America’s liberal coasts — she was raised in a hippie enclave in California and earned a degree in East Asian studies from Columbia — but her father grew up in the heartland, on a seven-thousand-acre wheat farm. When Mockett inherits the land, she decides that she needs to learn more about it — and more importantly, about the people who work the soil. Mockett accepts a harvest-season invitation to travel along the “wheat trail” (a loop from Idaho to Texas) with a group of evangelical Christian migrant workers. The divide between Mockett’s America and this rural, conservative one is stark, but Mockett creates a nuanced, empathetic portrait of a vast region little understood by coast dwellers.

If I Had Your Face

In South Korea, nearly a third of women between the ages of nineteen and twenty-nine have had some form of appearance-altering surgery or procedure. But what is it like for a young woman to live in a society with such crushingly unrealistic standards of beauty? Frances Cha explores that question in her complex debut novel, which follows four working-class women living in the same apartment building in Seoul. For all the women, financial stability hinges entirely on beauty, a disturbing but fascinating premise.

There are some aspects of evolution that, to the layperson, are difficult to parse. For example, how did certain traits necessary for survival (such as lungs for land-dwelling animals or feathers for birds) develop slowly over time? And how did ancient species survive without them? Enter Neil Shubin, a University of Chicago biology professor who is uniquely talented at explaining these challenging concepts to a general audience. His latest book takes readers through some of the big questions of evolution and reveals how DNA technology has completely changed the field over the last fifty years, providing answers to mysteries we once thought unknowable.

And Then They Stopped Talking to Me

When Judith Warner’s daughter entered middle school, it seemed like mother and daughter were both struggling — her daughter with the social dynamics of this new world and Warner with finding the tools to help her. So the best-selling author decided to learn more, interviewing parents, educators, scientists, and other experts. She found that some adolescent struggles are biological — there is a second wave of brain development between ages eleven and fourteen — but that many are exacerbated by well-meaning but overbearing, often achievement-
obsessed parenting. Her book offers practical advice on how parents can avoid this path and work to raise caring, moral teenagers.