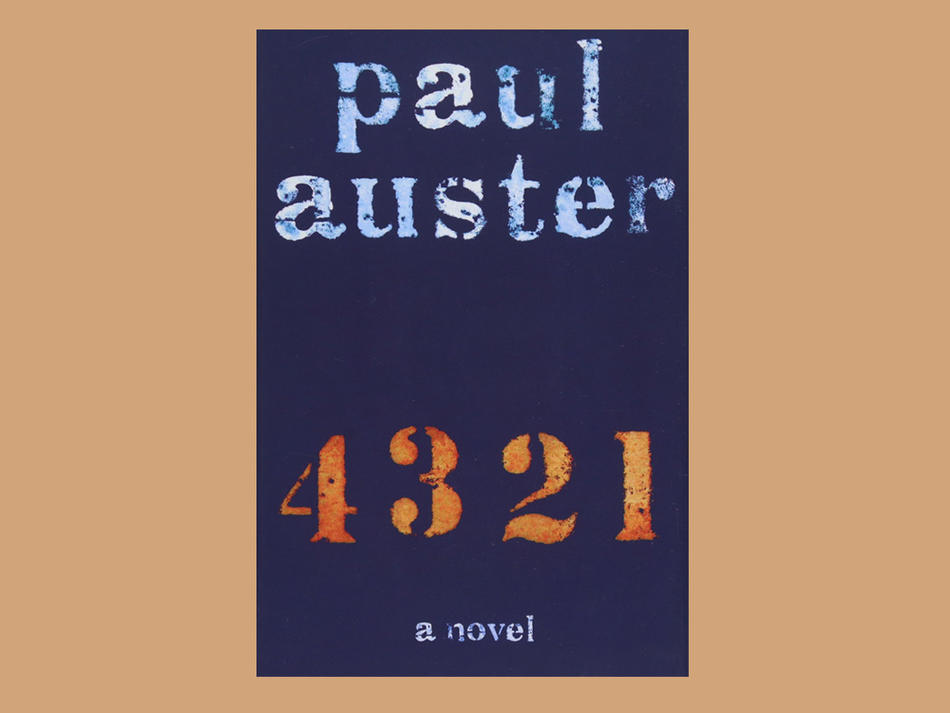 On the first page of Paul Auster’s new novel, 4 3 2 1, a man named Isaac Reznikoff steps off a boat at Ellis Island and is asked his name. Overwhelmed by his surroundings, he blurts out in Yiddish, “Ikh hob fargessen” — meaning “I’ve forgotten.” The clerk misunderstands, and within seconds, Reznikoff’s former identity is gone. In America, he will be known by the English transliteration of his Yiddish phrase: Ichabod Ferguson. Ferguson né Reznikoff is an incidental character — the book is about his grandson, Archie — but his story is a profound beginning to a novel preoccupied by a fundamental question: what makes someone the person he is? Is it birth or circumstance?

To find the answer, Auster ’69CC, ’70GSAS takes on a wildly ambitious project — telling the coming-of-age story of one boy in four separate but simultaneous narratives. In the book’s prologue, there is just one Archie, born an only child in Newark, New Jersey, in 1947. But beginning with chapter 1, when Archie is in grade school, Auster separates each chapter into four threads and tells a different version of Archie’s life in each one. At first, the changes are relatively small — in one thread, Archie’s father’s small-appliance store burns down, while in another the store prospers — but the variations accrue, eventually sending Archie down four completely divergent paths.

As Archie’s circumstances evolve, so do the people in his life. While some new characters are introduced in each thread, it’s particularly interesting to watch how Auster manipulates Archie’s supporting cast of friends and family. One scholarly aunt consistently influences Archie’s taste and interest in literature, yet in one thread she is a closeted lesbian living secretly with a partner in Palo Alto; in another a spinster in Chicago; and in a third, involved in an on-again, off-again romance with a male intellectual in New York. A cousin who is beloved in one story ends up betraying an adolescent Archie in another. And Archie’s first girlfriend Amy reemerges elsewhere as his stepcousin and still elsewhere as his stepsister, which makes for some amusingly uncomfortable narrative shifts.

This structural conceit gives Auster an unusually wide lens through which to view a volatile, fascinating period in American history: the 1960s, which coincides with Archie’s adolescence and college years. One Archie works in experimental theater in the burgeoning hippie enclave of Greenwich Village; one Archie rushes home to his parents, who lose everything in the Newark race riots of 1967; one Archie gets caught up in a racially charged incident in rural New Hampshire. And one Archie comes to Columbia, where, as a reporter for the Spectator, he covers one of the largest protests in student history: “What he was watching was a revolution in miniature, Ferguson decided, a revolution in a dollhouse.”

It’s impossible to discuss 4 3 2 1 without acknowledging the obvious autobiographical overtones. Archie was born exactly a month after Auster; and in all four iterations, he gravitates toward places important to Auster’s own life: northern New Jersey, Columbia, and Paris. Archie grapples with themes consistent throughout Auster’s novels: absent or difficult father figures, a deep devotion to sports and competition (especially baseball), and a search for identity through art. And all of the Archies become writers of some kind. The parallels between character and author make it clear that this isn’t just a rumination on identity in general, but a very personal quest.

It’s tempting to think about how our lives might have turned out if we had made different decisions, or if fate had dealt us a different hand. With this brilliantly rendered, intricately plotted epic, Auster has indulged that temptation and turned it into a magnum opus.