Book Review: "At Night We Walk in Circles" 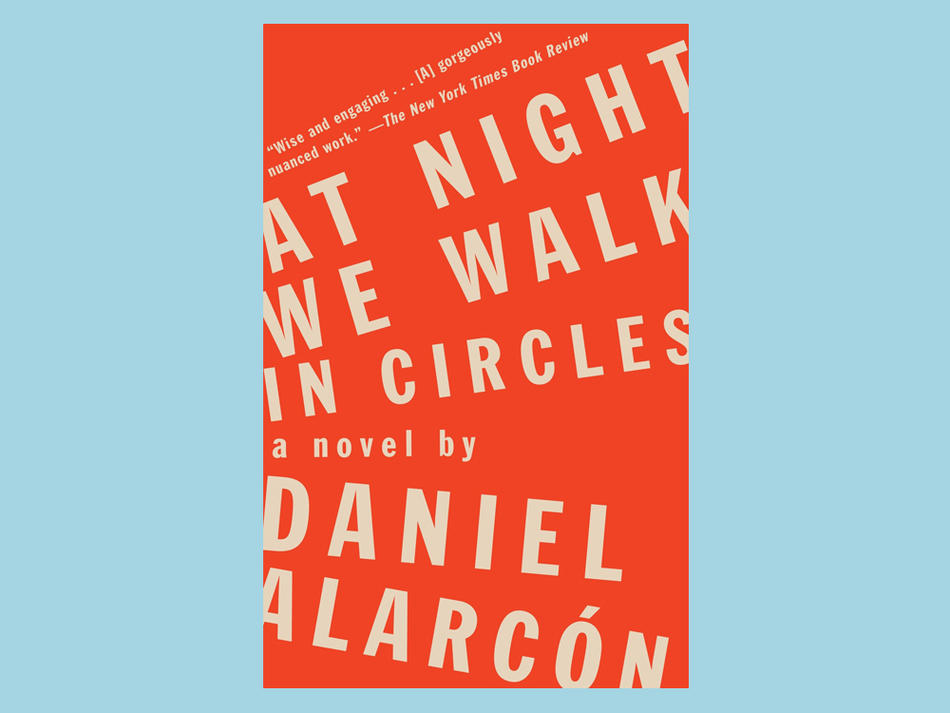 At Night We Walk in Circles, the title of the new novel by Daniel Alarcón ’99CC, is a willful mistranslation of the medieval Latin palindrome In girum imus nocte et consumimur igni. The correct translation is “We enter the circle at night and are consumed by fire.” The palindrome invites us to solve a riddle: what enters a circle at night and is consumed by fire? The answer is a moth, which, contrary to Alarcón’s title, does not walk, but flies. It’s a riddle as a title, too: nowhere in the novel itself does the palindrome appear.

An epigraph contains a clue, however. It’s from The Society of the Spectacle, by the avant-garde French writer and filmmaker Guy Debord, whose autobiographical final film, made in 1978, was titled In Girum Imus Nocte et Consumimur Igni. Debord, a key figure in the 1968 Paris uprising against the French government, was grounded in the Marxist, anarchist, surrealist movement he founded, the Situationist International. “At Night We Walk in Circles and Are Consumed by Fire” is also the title of a 2013 experimental nine-part song cycle inspired by dreams. The composer, Carla Kihlstedt, has said that trying to explain dreams during waking hours is like plugging a phrase into translation software. It yields confusing, even absurd results.

Readers won’t need these footnotes to appreciate Alarcón’s brooding, effortlessly readable second novel, set in an unnamed Andean country intent on forgetting the guerrilla war from which it has emerged, a place where “there were no statues to the dead, no streets renamed in their honor, no museum of historical memory.” The young actor Nelson scores a role in an infamous play, The Idiot President, which once landed its playwright in prison on trumped-up terrorism charges. As a child, Nelson had been transfixed by a jailhouse production of the play, broadcast on the radio. He idolized the playwright, Henry, who reluctantly resuscitates the play fifteen years after his arrest, reviving unnerving memories.

Taking the play on tour, into tiny, high-altitude towns in former guerrilla territory, leads Henry to the backwater where his late lover from prison used to live. There, Henry unwittingly reveals the lover’s death to the man’s dementia-ridden mother, who believed her son to have migrated, not died, fifteen years earlier. Nelson, who had already been instructed to cut off all ties to his own life to enter the world of the play, is now forced to act the part of the senile woman’s own absent son to cover up his mentor’s mistake.

Early in At Night We Walk in Circles, long before Nelson inhabits the roles of killer and dead man, an anonymous narrator intrudes into the story. He sounds omniscient because he has read Nelson’s journals from the troupe’s journey into the hills and has interviewed everyone who encountered Nelson — not just the ex-girlfriend he still loves, not just his widowed mother, not just the brother in America who abandoned him. As this journalist narrator reconstructs the story, from everyone’s perspective except Nelson’s, the tension builds. Clearly, something has happened to the actor. Exactly what is withheld until the very end, when the novel’s surrealism, if little else, becomes clear.

The novel’s indeterminate ending dazes us a bit, as if we’ve emerged from a midday screening of a movie onto streets too bright and too straight for the noir surrealism we encountered inside. But Alarcón’s Situationist allusions help us to understand that we should be puzzled and dissatisfied when we emerge. Alarcón means to play with our expectations of a neatly resolved narrative. And we’re supposed to be thinking about art’s disruptive intersection with politics, about how performance merges disturbingly with real life — both Situationist ideas, central to its critique of a society of spectators.

The Peruvian-born Alarcón’s first novel, Lost City Radio, focuses on a radio show that reunites the disappeared with their families in a country recovering from civil war. In At Night We Walk in Circles, regimes don’t steal people, but other things do: mundane death, rival lovers, America. The village where Henry’s late lover spent his childhood is eerily empty of men, except for adolescents and the elderly. It’s a world that García Márquez might have dreamed up, but in fact it’s real. Immigration has drained many villages of men across Latin America. It is easy for an infirm old woman to believe her son undocumented in Los Angeles rather than dead, and Alarcón evokes this simply, movingly, hauntingly.

Mostly, however, the novel’s pleasures are intellectual. Engaging readers as puzzle solvers, Alarcón, for instance, embeds mirrors throughout the text. Henry uses one during rehearsals to help Nelson inhabit his role. The don of Henry’s cell block is Espejo (Spanish for mirror). Nelson’s girl realizes she loves him in the moment when she mirrors his every gesture involuntarily. Nelson’s life reflects that of the missing son he impersonates. In a glass darkly, what happens to Nelson looks a little like what happened to Henry. And what, after all, is a palindrome if not a sequence of letters mirrored back at itself?

Top Stories
What Declassified Government Documents Reveal About America’s Dark Secrets
Book Review: Horse
Can the World’s Religions Help Save Us from Ecological Peril?
Drawing Connections with Wendy MacNaughton
Is Objectivity in Journalism Even Possible?
All categories >
Read more from Gaiutra Bahadur '97JRN