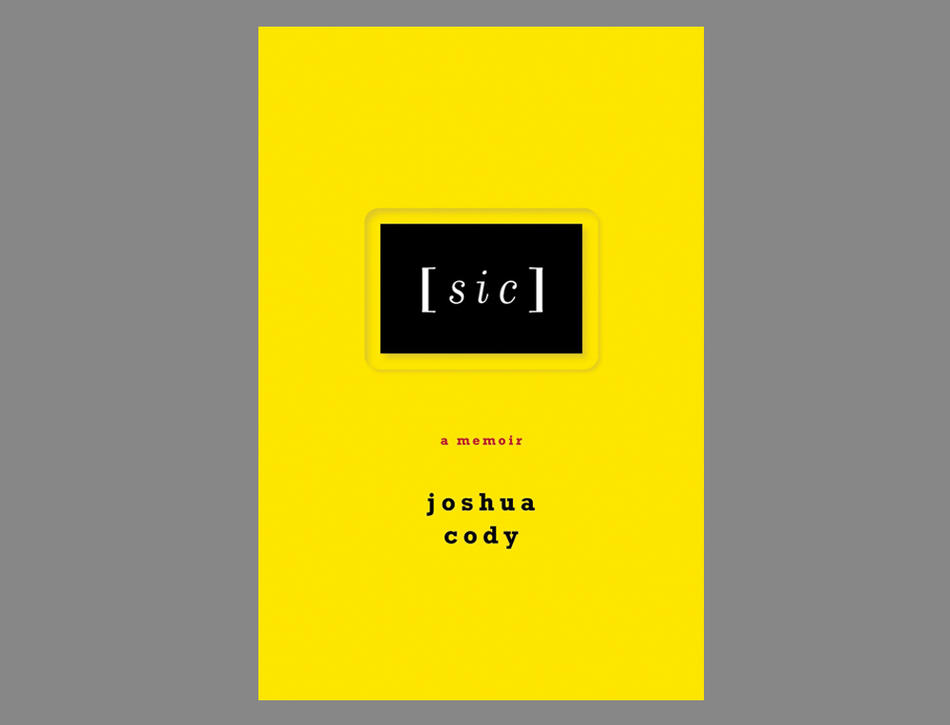 These are the facts: when Joshua Cody ’06GSAS was thirty-four, he was diagnosed with a rapidly metastasizing cancer, took a leave of absence from his doctoral program in music composition at Columbia, and was forced down an excruciating path of chemotherapy, radiation, and bone-marrow transplants.

The facts are distressing, certainly, but Cody’s memoir, [sic], succeeds by transcending them. In recent years, memoir has become a kind of genre of default — the expected response to any unexpected situation — and the repetitive weight of the ensuing bounty has begun to dull the narrative effects of some of the most horrifying human experiences: September 11, the Holocaust, abuse, addiction, and perhaps most commonly, cancer.

When Cody was first diagnosed, he, like many other patients, turned to the now-crowded shelves of cancer memoirs, hoping for a bit of comfort. What he found, he writes, left him cold: “pale pastel book after book, each one the same, the three-act structure of (I) diagnosis, and (II) the discovery of how beautiful life actually is and how there’s more to it than my hedge fund job ever told me it was and look at how lovely this flower is and this butterfly and this herbal tea, and (III) recovery and a book deal and getting a little place in Vermont maybe.”

There were no butterflies during Cody’s recovery, and only a single box of herbal tea, which he drank begrudgingly. Instead, he chased his chemo appointments with beers at a dark Tribeca bar, one-night stands with strangers he met on the street, and even a noseful of cocaine here and there: “After the amount of poison I’d dumped into my body for the last few weeks,” he writes, “what on earth could be harmed by a half a gram of cocaine?”

Cody is equally cavalier about his relationships with women, and discards several over the course of his illness. Caroline the stripper is replaced with Sophie the recovering addict, who sticks with Cody through his radiation only to leave his bedside abruptly after a misunderstanding that he chooses not to correct. An extended morphine-fueled fantasy provides the next leading lady, an imaginary Bulgarian wife named Valentina, before Cody falls into a deep, disastrous real relationship with the unnamed, unstable pain-management doctor who provided him with the morphine in the first place.

If Cody’s unorthodox approach to healing seems shallow, it is punctuated by raw anger and surprising tenderness, both far more effective than the typical life-is-beautiful revelations. Some moments are internal, as at the beginning of the book, where he tries to sort through his feelings about being sick: “Because you hate the disease, you hate yourself for having the disease. You don’t want to die: it’s the opposite of suicidal; the source of the rage and shame is in the will to live itself.” Even more involve his family, to whom he gives a strong voice, though his father died of emphysema just before Cody was diagnosed. The book includes scanned entries from the journal that his mother kept at his hospital bedside, as well as old letters and stories written by his father. His parents’ calm, compassionate voices serve as antidotes to Cody’s own sometimes manic prose — sentences that run a whole page, for example, or frenetic, tangential footnotes — but even more, they replace the often maudlin realizations of patients just beginning to value their relationships. Cody doesn’t need to resort to sentimentality to describe the importance of family during his ordeal; the journal entries and letters are hard evidence.

Cody’s influences are clear: Ezra Pound, T. S. Eliot, and W. H. Auden pop up in the text as regularly as his friends, family, and lovers do, while the postmodern memoirists Susan Sontag, Dave Eggers, and especially David Foster Wallace sit (heavily, at times) on his shoulders. Like them, Cody doesn’t always confront his experience head-on, but meanders around it with the help of photographs, letters, poems, paintings, and diagrams, a style that makes the punning title particularly apt.

One influence is clearly dominant, though, and it ultimately sets this memoir apart. Cody, who now works in New York as a composer and filmmaker, doesn’t think of himself as a writer, at least in the traditional sense of the word (“I’m just writing this one thing, and that’s it,” he insists). It is not surprising, then, that the man with “no memory of not knowing how to read music,” turns not to Pound or even

Wallace for ultimate inspiration, but rather to the French composer Claude Debussy. At the beginning of the book, Cody describes an important principle in music composition called the golden ratio: “the way in Debussy (just to pick one) the music can be wandering along for a while and you find yourself drifting . . . and then all of a sudden the music does something: it asserts its presence and opens up to take you in and it feels like the pilot has moved the throttle and you feel motion again.” Cody clearly uses this concept as a metaphor for his illness, and, indeed, there is a point in the book when everything converges and wakes him from what seemed like certain death. Likewise, it is easy to get lost in Cody’s bizarre journey, to drift through his rantings about literature and art and music and love and sex and family and illness and death, barely remembering what you’re reading at all. But when the text asserts itself, it is bold, brilliant, and entirely clear.