Book Review: "Your Duck Is My Duck" 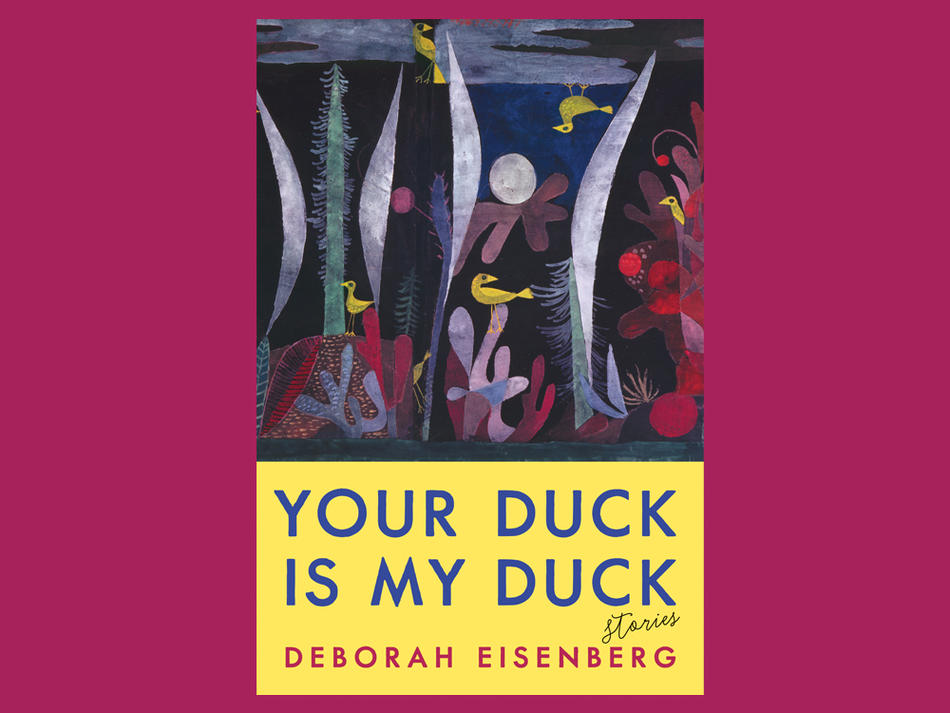 Deborah Eisenberg, a professor of writing at Columbia’s School of the Arts, is a rarity among fiction writers: one who sticks strictly to short stories. But as her passionately devoted fans would say, with stories like hers, who needs novels? With Your Duck Is My Duck, her much-anticipated fifth original collection and the first since 2006’s Twilight of the Superheroes, Eisenberg again proves that short fiction can be equally complex, fulfilling, and engrossing.

Eisenberg’s style is idiosyncratic and notoriously difficult to describe. It slides in and out of tenses and points of view. It can be meandering, ambivalent, and pastiche-like, and yet it is ultimately precise, penetrating, and morally unambiguous. She is often hilarious and always surprising. The opening sentence of the title story is a pretty good distillation of her voice: “Way back — oh, not all that long ago, actually, just a couple of years, but back before I’d gotten a glimpse of the gears and levers and pulleys that dredge the future up from the earth’s core to its surface — I was going to a lot of parties.” At one of these parties, the narrator, a painter in a creative slump, runs into a wealthy couple who whisk her off to their “beach place” on an unnamed tropical island, where they seem to gather an odd array of friends, business associates, and artists. One of them, a puppeteer, explains to the narrator that the island has descended into poverty because the wealthy couple has bought up most of its arable land. His work in progress is, fittingly, an allegorical show featuring donkeys, bats, and serfs who mount an insurrection against an evil monarchy that is secretly controlled by an even more evil corporate empire. (Yes, it’s depressing, the puppeteer says, but “I mean, these are the facts.”)

The story’s title derives from a purported Zen koan drunkenly, and inaccurately, invoked at dinner by the husband of the host couple. He reminds the team of accountants and lawyers he has inexplicably gathered at his beach house that if the deal they’re working on falls through, he owes them nothing. “‘Don’t think for a moment that if the boat is scuttled, I’ll throw you my rope. I’m sure you all recall the Zen riddle about the great Zen master, his disciple, and the duck trapped in the bottle? … Everyone recall the master’s lesson? It’s not my duck, it’s not my bottle, it’s not my problem?’”

That duck hovers in the background of all six stories in this collection, particularly “Merge,” its tour de force. Here, Eisenberg takes on the subject of language itself — “the tool that doesn’t work,” in one character’s estimation.Told mostly in flashbacks, “Merge” immerses us in the intersecting lives of three New Yorkers living in the same apartment complex: Keith, fresh out of Princeton and now living on $10,000 he’s stolen from his father, a brutal captain of a scorched-earth industry; Celeste, an idealistic young woman with whom Keith falls unexpectedly in love; and Celeste’s neighbor Cordis, an elderly former bookstore owner. We also hear about Cordis’s beloved husband, a self-styled archaeologist bent on discovering the origins of language, who  disappeared twenty years earlier during an excavation. (Among his theories, a sound bite that could be used to sum up many stories in the book: language is “amenable to many uses, but it developed to serve the pressing demands of malice, vengefulness, and greed —humanity’s most consistent attributes.”)

Desperately in need of money, Keith takes a job as Cordis’s personal assistant, and while working there, he grows close to Celeste. Keith is burdened by the theft of his father’s money and finally decides to confess to Celeste, just as she is about to leave for a work project in Slovakia. She cuts off ties with him, and in her absence, Keith loses his resolve to be free of his father and drifts back to the dreadful man’s dubious protection. Cordis becomes more and more frail. And several harrowing passages in Celeste’s voice reveal that she has fallen gravely ill in Eastern Europe. These achingly real characters struggle to express their better selves and connect with one another, but they often mangle the attempt or let the opportunity slip away. Words fail; the reader’s heart breaks.

Heartbreak, in fact, is an inescapable theme in this volume, amid the cascades of perfectly imperfect sentences, the chuckle-inducing insights, the spot-on characterizations of contemporary mores, the unblinking intelligence, the profound (but rarely overt) political engagement, the fierce yet tender humanism. We inhabit a world that’s “producing perpetually increasing awfulness from rock-bottom bad,” and trapped ducks are everywhere. Those ducks, Eisenberg insists, are our ducks.