A Columbia panel holds a central principle up to the light.

That journalists should strive for impartiality when reporting the news is an article of faith in America. Objectivity has long been seen as the gold standard of journalistic integrity. But if the demise of the FCC’s fairness doctrine in 1987 eroded that ideal, more recent social currents have all but toppled it. The threat of authoritarianism and the growing influence of journalists from marginalized backgrounds have given fresh kindling to one of the profession’s hottest debates. As the new dean of Columbia Journalism School, Jelani Cobb wanted to confront the issue. And so this fall, in the first public program of his deanship, Cobb convened “The Objectivity Wars,” a hard-hitting panel discussion in Pulitzer Hall moderated by Kyle Pope, editor and publisher of the Columbia Journalism Review.

A critical tone was set as Wesley Lowery, who won a Pulitzer in 2016 at age twenty-five as part of a Washington Post team reporting on police shootings, reminded the room that “the act of journalism, no matter how much we may fetishize the idea of objectivity, requires a series, a pyramid, of subjective decision-making.” For Lowery, those decisions — what stories to run, what resources to invest, who to quote — are limited by the people who make the decisions and the interests they serve. And in the history of American journalism, he said, those decisions have been made “almost exclusively by upper-class white men.”

Lowery recalled that in 2019, President Donald Trump tweeted that four congresswomen of color should “go back” to the “crime infested [countries] from which they came” — which, said Lowery, “by all objective fact is a nativist attack, and nativism is a form of racism. The thing he did was racist. And yet most of our news organizations refused to describe it as such. Here we are, the bulwarks of our democracy, the fourth estate, too scared to look at the sky and say that it’s blue.”

Rutgers historian David Greenberg ’01GSAS noted that objectivity was never the bedrock of early American newspapers, which for most of the nineteenth century were aligned with political parties (thus names like the Springfield Republican and the St. Louis Globe-Democrat). But, he explained, the rise of professionalization and the application of scientific methods to studying the social world seeped into journalism, so that when Adolph Ochs bought the New York Times in 1896, he promised to “give the news impartially, without fear or favor.”

While acknowledging the pitfall of “both-sides-ism” — giving equal weight to an opposing argument regardless of its soundness — Greenberg defended the pursuit of objectivity as “the attempt to identify our own biases and correct for them so they don’t inflect the conveyance of the news.” He argued that “aspirational journalistic objectivity” was an essential “baseline” in a news ecosystem swimming with opinion, advocacy, and partisanship.

North Carolina–based journalist Lewis Raven Wallace had a different take. Before being fired in 2017 for publishing a blog post on Medium.com called “Objectivity is dead, and I’m okay with it,” Wallace had covered the economy for public radio. But Trump’s election changed everything. Wallace, who is a trans man and who entered journalism from an activist background, had suppressed his moral judgments in the name of neutrality. Now he attended meetings where such questions arose as: if we run two stories on Trump’s lies, do we need a third story about something good that he did?

Lowery, who is Black, focused on how the banner of objectivity has served the status quo. “There’s not a single day in most cities that the local mainstream newspapers properly, fairly, accurately cover the Black community, the immigrant community, the gay community,” he said. He ascribed this failure to the lack of distinction between “subjective” and “objective” journalists. “It’s a bunch of people telling themselves they’re objective journalists and then writing their opinions into the news, and doing so by deciding what stories they cover and what stories they don’t cover.” Objectivity, said Lowery, “has always been wielded to silence people who do not fit with the politics of the people who own and operate the newspapers.”

New Yorker writer Masha Gessen took things a step further. “My argument,” Gessen said, “is simply that if we’re going to have an ideal, then moral clarity would be a much better guiding ideal for journalism than objectivity.” Writing about AIDS in the gay press in the 1980s, Gessen, who is nonbinary, realized that journalism was “inherently political,” and that journalistic choices created realities that would not have otherwise existed. “We reported on drug trials, on promising drugs, and people found out about them because they read about it.” As for objectivity, Gessen said, “it’s a style that since the beginning of the Trump presidency has served to normalize things that ought not be normalized.”

Despite political clouds overhead, the day was not without a ray of levity. At one point, Lowery noted that the newspaper industry “until very recently had completely excluded people of color from its leadership,” and that if J-school founder Joseph Pulitzer were to come back to life, he would hardly know what to make of the people on the panel, “much less that Jelani Cobb is the dean of the school.”

Amid laughter, Cobb, offstage, called out, “He had an editor named Frank Cobb. He just didn’t look like me.”

This article appears in the Winter 2022-23 print edition of Columbia Magazine with the title "Objectivity and Its Discontents." 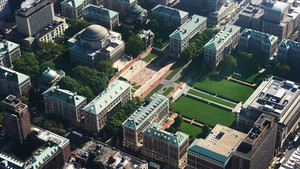 New Commission on the History of Race and Racism Established