New and noteworthy books from alumni and faculty. 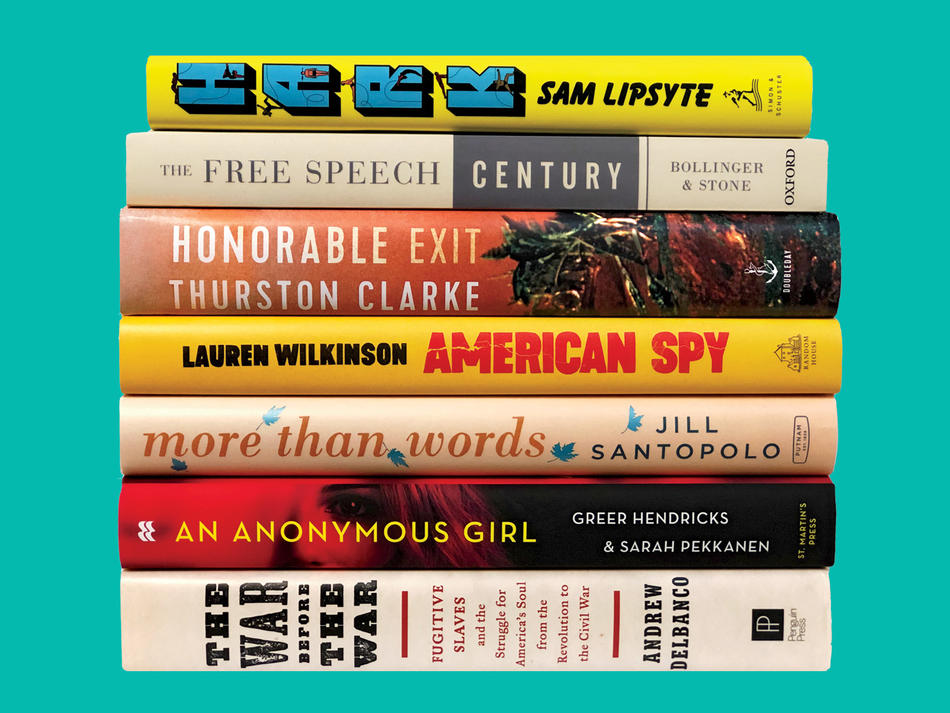 It’s 1987 and Marie Mitchell is one of the few Black, female agents at the FBI. Plum assignments rarely come her way, but one day the CIA invites her to join an exciting new covert operation in West Africa. Sent to Burkina Faso, Mitchell is tasked with undermining the regime of the country’s new Marxist leader, Thomas Sankara. Mitchell is drawn to the charismatic Sankara, but she has to stay focused because the assignment is also personal — the project’s lead investigator could hold clues to the mysterious death of her sister. It’s a searing, sophisticated debut novel, infused with complex racial politics and plenty of heart-stopping suspense.

Hubert van Es’s iconic 1975 photograph of the fall of Saigon — a group of desperate people on a rooftop, lining up to escape on one of the last American helicopters — seems to symbolize US failure and shame. But historian Thurston Clarke contends that the image is actually one of American heroism. His inspiring new book tells the little-known story of the American soldiers, journalists, diplomats, and others who risked their lives helping more than 130,000 South Vietnamese citizens escape to US military bases in Guam and the Philippines during the last days of the war.

Hark Morner makes his living working the crowds at business seminars with empty spiels about boosting productivity. But then people start to take him seriously. After he develops a focusing technique he calls “Mental Archery,” Morner becomes an accidental guru. His antidote to the stress, distraction, and overstimulation of our culture involves an absurd mix of yoga, mindfulness, and — amusingly — some actual archery. Lipsyte, a Columbia professor of writing, has cheeky prose and a sardonic wit, but he treats his characters with empathy and warmth.

Jill Santopolo’s first novel, The Light We Lost, about two Columbia students who meet on September 11, 2001, became a massive bestseller and was picked for Reese Witherspoon’s book club. Now Santopolo is back with her second, and it’s equally smart and romantic. Her protagonist, Nina, heir to a New York hotel empire, is forced to confront uncomfortable family secrets after the death of her father — secrets that make her second-guess her own personal relationships.

The War before the War

In the century leading up to the Civil War, the issue of fugitive slaves fleeing the South and seeking refuge in the North became increasingly divisive in the new republic. In addition to losing labor, Southern states worried that the runaways would expose the true injustices of slavery, contradicting the myths that they’d sought to perpetuate, and therefore further inciting Northern abolitionists. In his fascinating new book, Columbia American-studies professor Andrew Delbanco looks at how these brave fugitives played a major role in creating the cultural chasm that prompted the Civil War and eventually led to emancipation.

Jessica Farris, a struggling makeup artist, signs up to participate in a psychological study in exchange for a much-needed five hundred dollars. But the questions quickly get weird, and Farris finds herself at the mercy of the study’s director, a mysterious doctor with ulterior motives. Hendricks and Pekkanen, the authors of the mega-best-selling thriller The Wife Between Us, once again subvert expectations and conventional narrative structure, making it impossible to know who to trust.

Though the right to free speech was written into the Constitution in 1791 it was for over a century seen more as an ideal than as enforceable law. That changed in 1919 with the seminal Supreme Court decision Schenck v. United States, which laid the groundwork for a society that Columbia President Lee C. Bollinger calls “the most speech protective of any nation on Earth.” On the hundredth anniversary of the decision, Bollinger and University of Chicago law professor Geoffrey R. Stone present sixteen essays from fellow First Amendment scholars on the evolution of free speech over the last century and the challenges it faces in the modern era.

For better or for worse, social distancing has left plenty of time for self-examination, and with it, new opportunities for personal growth