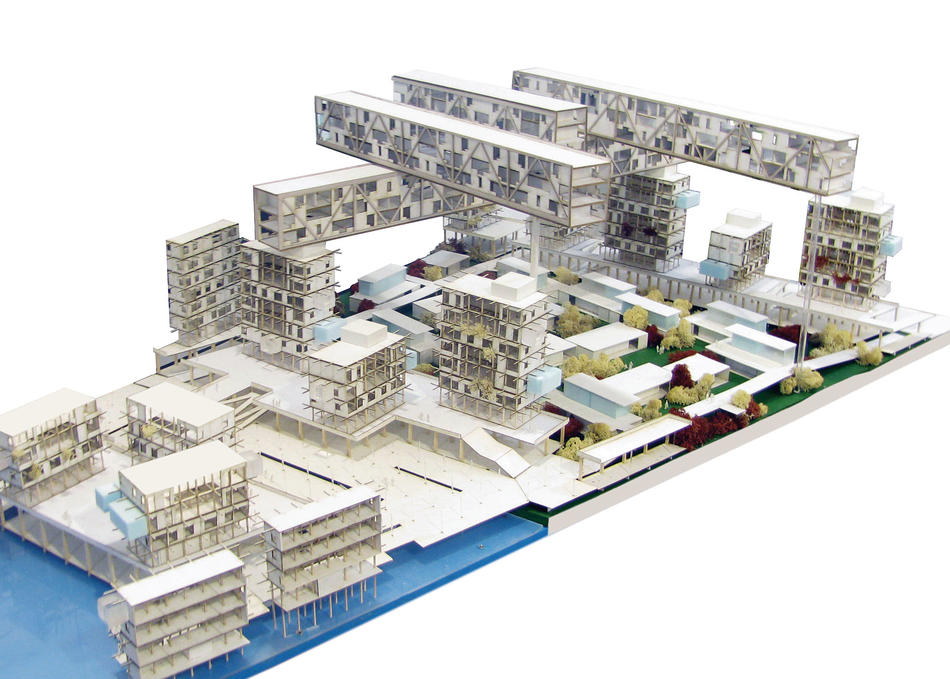 Contaminated industrial sites, or brownfields, are often the only available plots of land in urban areas. Developers may get scared off, however, by the prospect of a long and expensive cleanup.

Architecture students Daniel Baciuska and Andy Vann have an original approach for developing housing on a contaminated brownfield. Their plans won first place in a design competition sponsored recently by the Queens chapter of the American Institute of Architects.

Baciuska and Vann’s chief innovation is to extend bridge-like structures over contaminated land so that housing can be constructed and inhabited at the same time that trees, shrubs, and grasses are purging the soil of toxins — through a slow, organic process called bioremediation. “We thought, how can we remedy this site and also develop it simultaneously?” said Baciuska.

Their imagined development, a futuristic-looking cluster of glass-and-steel blocks, would proceed in three phases over 30 years. First, towers would rise on the outskirts of the property; then a network of bridges would span newly planted fields of vegetation; finally, housing would colonize the property at ground level.

“The idea that housing would initially hover over the landscape, and then get built downward in sequential stages, is quite innovative,” says adjunct architecture professor Robert Marino, who cotaught the course for which the students completed the project. “By giving students the freedom to pursue inventive solutions, interesting ideas are raised that might not happen in practice. These ideas can filter through to the real world. In many ways, that’s how progress is made in architecture.”