Heady Times, Heartbreak, and Hope along the Grand Concourse in the Bronx, by Constance Rosenblum '67JRN (NYU Press). 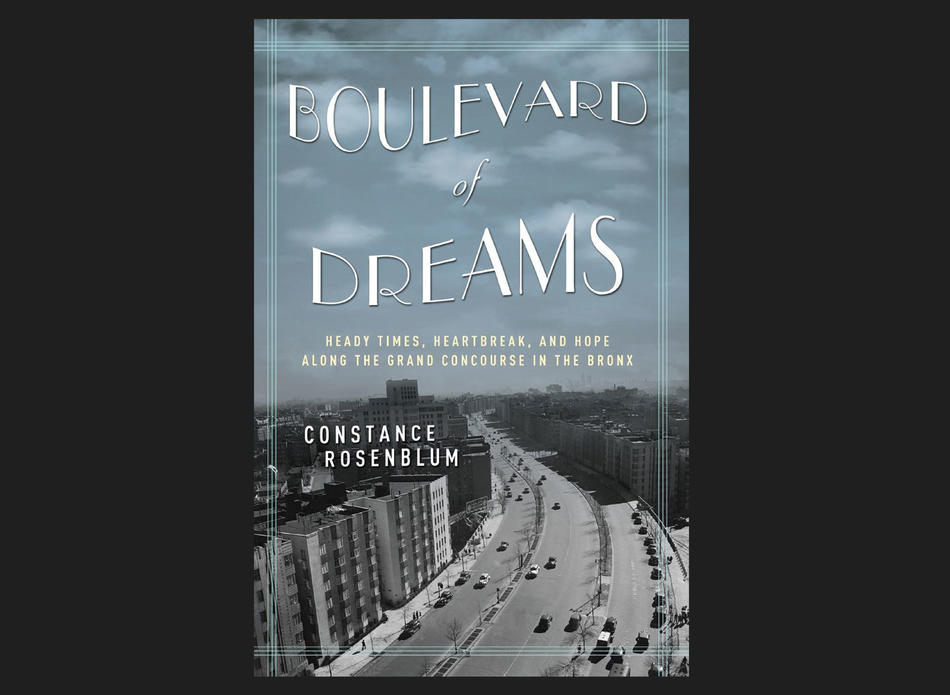 In the history of New York City, the Bronx belongs to one of two narratives. The first is a narrative of irrelevance, of mere proximity to Manhattan, without the stature of a storied outer borough like Brooklyn. The second narrative is one of terminal decline, the terrors contained within a simple geographic designation — the South Bronx. Constance Rosenblum ’67JRN, a former editor of the New York Times City and Arts & Leisure sections, adds a forgotten narrative to the standard two, even if her chronicle of urban splendor, erected at the very center of the Bronx, does evolve into the familiar narrative of devastation. Boulevard of Dreams describes “a moment of all but tangible optimism and seemingly unlimited possibilities,” experienced in the vicinity of a single street, the Grand Concourse. It was completed in 1909 and was, from the 1920s through the 1960s, a place of vaunting architectural and immigrant (or postimmigrant) ambition.

Boulevard of Dreams creates memorable images of the Grand Concourse in its midcentury golden age — its spectacular buildings, its elegant, vibrant street life — and Rosenblum includes many fascinating biographies, starting with civil engineer Louis Risse, the European-born visionary who dreamed of a Parisian concourse in New York. The book concludes with present-day visionaries seeking to revive this street and its surrounding area. If their modest successes do not amount to a renaissance, they may mark the end of a long and miserable phase.

At the turn of the century, Risse dismissed other Bronx thoroughfares for development since they “could never function as proper boulevards,” and he built the Grand Concourse on a ridge, which gave the street a natural elevation, providing many of its inhabitants with wonderful views. The architects who later built on Risse’s boulevard matched their talent and fantasy to the street’s grand potential; though their apartment buildings, hotels, and cinemas did not conform to any single style, several were (and remain) art deco and art moderne masterpieces.

The Grand Concourse was never a stable destination. It was initially “a mecca for immigrants and their offspring,” especially for Jews moving from the working-class East Bronx to the ostentatiously middle-class West Bronx, which also had its Irish American and Italian American enclaves. The black migration was a presence from the 1920s onward, though blacks were prevented by de facto segregation from living on the Concourse. For the Jewish bourgeoisie that gathered around the Concourse, the paradise of community and of urban glamour was real, and it was certainly desirable, but it was never quite as beguiling as the upward mobility that had brought them to the West Bronx in the first place.

It is fitting that Ralph Lauren, an American icon of Anglophilic gentility, grew up near the Concourse; in his younger years he was Ralphie Lipschitz. Professionally, his aim was not to immortalize the Bronx in American fashion; it was to leave the Bronx behind by entering the upper reaches of the American elite, and to make this entry, or this motion, accessible to his customers.

Ralphie Lipschitz’s transformation into Ralph Lauren reflected a demographic truth. Concourse dwellers who continued their upward mobility either went south to Manhattan or north to Westchester County. The children raised on the Concourse in the 1940s and 1950s, the writer E. L. Doctorow and the filmmaker Stanley Kubrick among them, rejected the world of their parents, Rosenblum writes. In some ways, however, they were recognizably their ancestors’ offspring. An earlier generation had fled tenements and slums for the Concourse, and the generation before that had left the Old World for the New.

The postwar departure of youth, from the Bronx and into the wide world, foreshadowed an unanticipated collapse, and Rosenblum’s book about urban dreaming makes the nightmare city of the 1970s and 1980s, the South Bronx of legend, seem all the more strange and terrible. The leaving had begun early, and it collided with other large-scale trends. A predominantly Jewish middle class initiated a rapid diaspora from the Bronx in the late 1960s, mostly to the suburbs, “a textbook example of how the American city fared in the 20th century.” It is a daunting illustration, made vivid by the vertiginous career of this unfortunate street. A collapse of infrastructure and a rise in crime and narcotics, coupled with heedless urban planning, turned a Parisian boulevard into a dangerous highway from which the poor and the elderly were unable to escape — and hardly able to cross.

Rosenblum’s tone is not entirely consistent in Boulevard of Dreams. It wavers between an exuberant enjoyment of “the Golden Ghetto” and shock at a city’s tragedy that was not caused by war or natural disaster. The rise and fall are two contrasting elements of the same story. But Rosenblum’s book is not a work of analytical history, nor a book about causes. It is a beautiful act of re-creation, untainted by nostalgia, and too varied, too accurate to be only despairing. Perhaps because of her background in journalism, Rosenblum has a fine feel for the everyday people who walked the Grand Concourse; she incorporates their voices into her history.

At the beginning of this charming book, Rosenblum writes about Louis Risse and his audacious decision as chief topographical engineer to include the Bronx on the first official map of Greater New York, which he finished in 1900. In Boulevard of Dreams, Rosenblum has done the same with the Grand Concourse, putting its history on the map of the Bronx and helping, once again, to put the Bronx on the map of Greater New York.