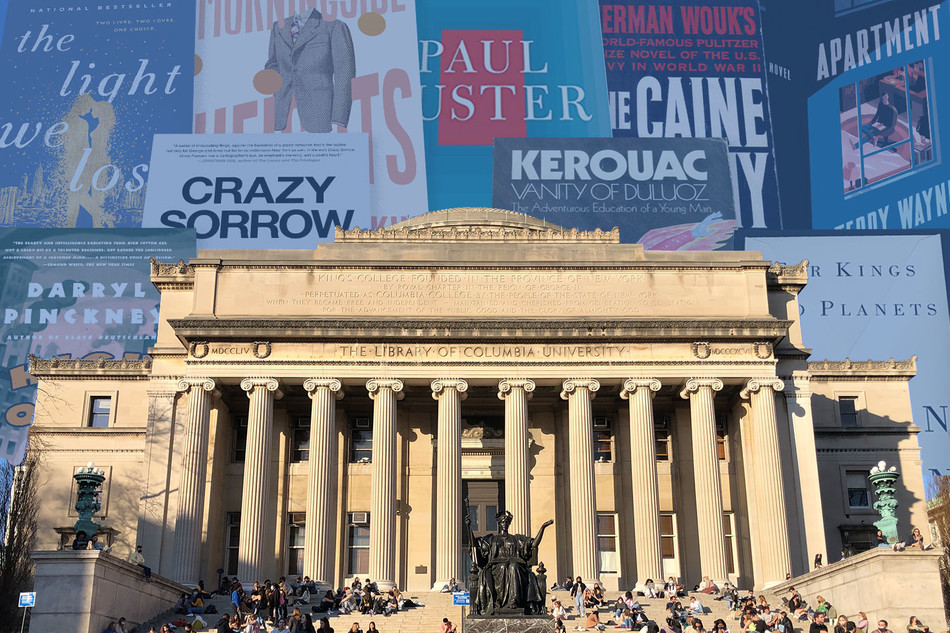 For the first time in eighteen months, dorms are full, lectures have resumed, and College Walk is buzzing with life. If you’re not on campus, revisit some of your favorite haunts in these eleven novels, all set on or near Columbia’s hallowed halls.

Columbia figures prominently in Paul Auster’s oeuvre but particularly in these three novels. In Moon Palace, orphan Marco Fogg starts college at Columbia but spends most of his time in an apartment near campus, making his way through the 1492 books he inherited from his uncle Victor. Invisible, a novel told from four alternating points of view, follows Columbia student Adam Walker and his complicated entanglement with a political science professor. And in 4 3 2 1, a novel that follows protagonist Archie Ferguson through several possible life trajectories, one plotline leads him to Columbia, where he is swept up in the campus protests of 1968.

Darryl Pinckney’s first novel, a semi-autobiographical exploration of growing up “Black and bourgeois” in America, follows an unnamed narrator from his childhood in Indianapolis to college at Columbia and a literary life thereafter. Pinckney, a fourth-generation Black college graduate, sheds light on campus life as a member of what W.E.B. DuBois called “the talented tenth.”

On the morning of September 11, 2001, Columbia College seniors Lucy and Gabe take refuge on the roof of Wien Hall — a meeting that sparks a complicated love affair spanning the next two decades. Jill Santopolo’s bestselling novel, an epic love story, captures the frenetic, tragic energy of campus on a life-altering day.

On the surface, the unnamed narrator of Teddy Wayne’s novel has it all: a place in Columbia’s vaunted MFA program, tuition fully paid by his father, and a two-bedroom rent-controlled apartment all to himself. Wracked with guilt (and loneliness), the narrator offers up his second bedroom rent-free to Billy, a charming classmate trying to make ends meet. The book is a nuanced portrait of both men, of their volatile friendship, and of student life in New York in the mid-1990s.

Most of the action in The Caine Mutiny takes place aboard the U.S.S. Caine, a destroyer minesweeper. But the Pulitzer Prize-winning classic novel opens at Columbia’s Furnald Hall, where future ensign Willie Keith has just enrolled in midshipmen’s school. More than 20,000 ensigns graduated from the actual US Naval Reserve Midshipman’s School at Columbia and Herman Wouk offers a fascinating look at the University in wartime.

Joshua Henkin’s debut novel is really a portrait of a marriage. Columbia Shakespeare professor Spence Robin and his wife (and former student), Pru Steiner, must grapple with the devastating toll that Alzheimer’s disease takes on their family and relationship. Set on and around campus, the book is loosely based on the life of the author’s father, Louis Henkin, who taught at Columbia Law School for more than fifty years.

Jack Kerouac’s semi-autobiographical novel — the last that he published before dying in 1969 — follows alter ego Jack Duluoz through his early life: his childhood in Lowell, Massachusetts; his time on the football field at Columbia; and his naval service during World War II. Like Duluoz, Kerouac dropped out of Columbia after his football career was sidelined by a broken leg. But the friendships that he made there, over endless drinks at the West End bar, came to shape a generation of fiction.

For Kings and Planets

When Orno Tarcher, fresh from rural Missouri, meets Marshall Emerson, Manhattan sophisticate, on the second day of his freshman year at Columbia, in 1974, he knows that everything has changed: “His whole life he would remember this moment: the world opening.”  Ethan Canin’s beloved novel follows the complicated friendship between the two men — and the women they love — through college and for decades thereafter.

George and Anna are sophomores at Columbia and Barnard, respectively, when they meet on the eve of America’s bicentennial. Their initial romance is short, but Vince Passaro’s second novel follows them for four decades as they find their way back to each other. The city of New York is as much a character in this sweeping story as George and Anna are, and Passaro deftly charts its evolution from the 1970s to the present day.