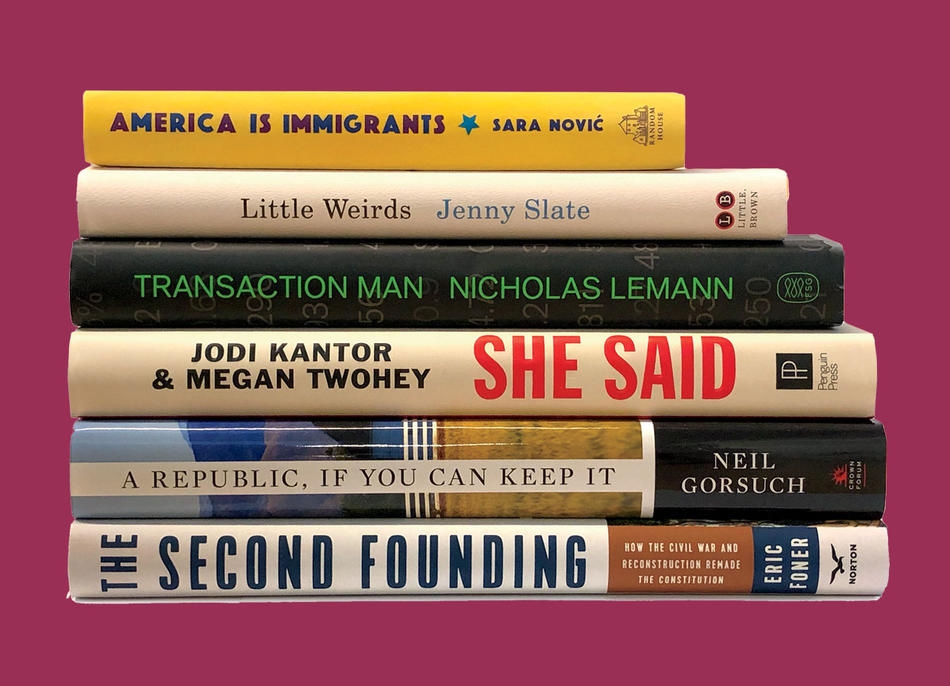 America is a nation of immigrants, and in her timely new book, Sara Nović helps us to understand exactly where we’d be without them. The book is a collection of short biographies, all written by Nović (the author of the award-winning novel Girl at War) and illustrated by Alison Kolesar. Many of the names will be familiar — Madeleine Albright ’68SIPA, ’76GSAS, ’95HON, Alfred Hitchcock ’72HON, Rihanna — but Nović also includes lesser-known figures, such as the brilliant Bangladeshi engineer behind Chicago’s Sears Tower and the groundbreaking scientists — many of them refugees from Nazi-occupied Europe — who worked on the Manhattan Project.

Actress, comedian, and former Saturday Night Live cast member Jenny Slate first demonstrated the power of her unfiltered imagination in the children’s Web series and bestselling book Marcel the Shell with Shoes On (both written with Dean Fleischer-Camp). In her new essay collection, she applies her trademark goofy wit to more-adult topics, including love, divorce, and depression. But while there may be depth and gravity to her subjects, the book is still pure Jenny Slate — quirky, a little bit wild, and endlessly fun.

America has undergone significant cultural change over the past generation, but rather than looking to the usual suspects to explain “the rise of the deal and the decline of the American dream,” Columbia Journalism School dean emeritus Nicholas Lemann digs deeper. In his latest book, he creates portraits of three lesser-known Americans whose lives and work help illustrate the country’s shift from “an institution-oriented to a transaction-oriented society” and give human context to the seemingly inexorable financialization of our culture.

When journalists Jodi Kantor and Megan Twohey broke the story of Harvey Weinstein’s decades of sexual harassment and abuse in the New York Times, they never could have predicted what would happen next. In the months that followed, hundreds of women would come forward to share their own stories of mistreatment, fueling outrage, activism, and the #MeToo movement. Now, in their new book, the Pulitzer Prize–winning team offers a riveting behind-the-scenes look at the perils, process, and payoff of this extraordinary feat of investigative journalism.

A Republic, If You Can Keep It

At the Constitutional Convention of 1787, Benjamin Franklin famously said that he and his fellow Founding Fathers had built “a republic, if you can keep it.” As a lawyer and judge for more than thirty years, and now as an associate justice of the US Supreme Court, Neil Gorsuch writes that he is committed to preserving this vision — in other words, with keeping it. His latest book is a memoir of his time in public office and the experiences that have shaped his successful career. In it he reflects on some of his core values — particularly how he sees the role of a judge in today’s society, the importance of civic education and civil discourse, and why he believes strongly in an originalist interpretation of the Constitution.

The Second Founding: How the Civil War and Reconstruction Remade the Constitution

In the wake of the Civil War, Congress passed the Thirteenth, Fourteenth, and Fifteenth Amendments to the US Constitution. Known as the Reconstruction amendments, they abolished slavery, provided for birthright citizenship, guaranteed equal protection under the law, and established suffrage for Black men. In his fascinating new book, Eric Foner — Columbia’s DeWitt Clinton Professor Emeritus of History — delves into the story of these groundbreaking amendments, the subsequent Supreme Court battles that essentially nullified them for many decades, and their enduring yet fragile legacy.

Top Stories
11 Novels that Will Transport You Back to Morningside Heights
Count:
2,947
30 Bingeable TV Shows Made by Columbia Graduates
Count:
569
The Mental Weight of COVID-19
Count:
296
Review: "St. Lucy's Home for Girls Raised by Wolves"
Count:
246
How Your Birth Month Influences Your Health
Count:
178
All categories >
Read more from Rebecca Shapiro