The Forgotten Struggle of Civil Rights in the North, by Thomas J. Sugrue '84CC (Random House). 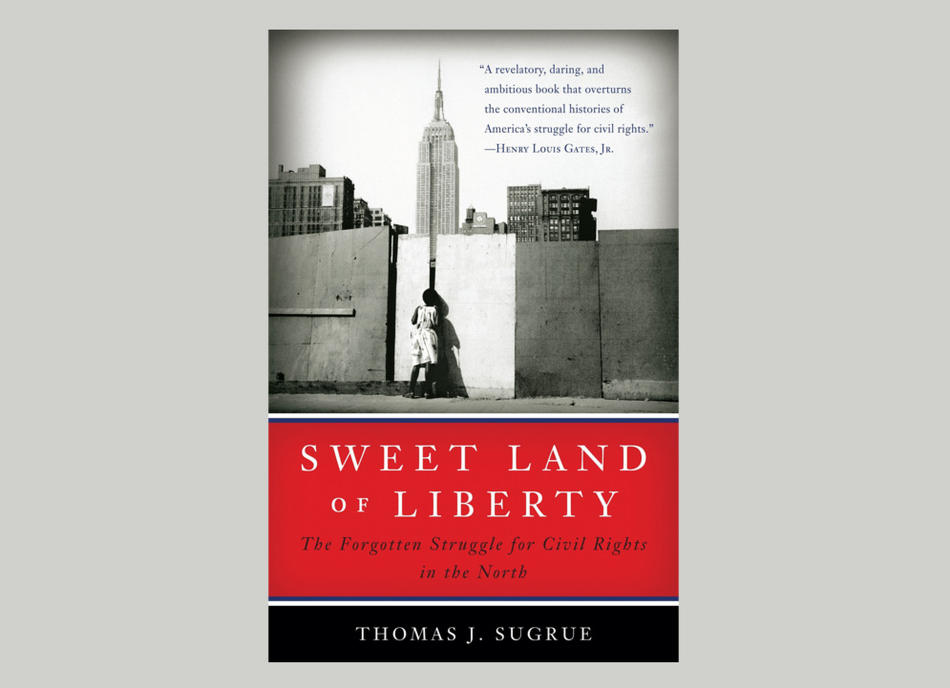 On a warm June night in 1950, four black students from Crozer Theological Seminary drove from Chester, Pennsylvania, into New Jersey looking for a place to eat. A half hour later they came across a diner in Maple Shade called Mary’s Cafe. They walked in and sat down, but the waitress refused to serve them.

The students complained; one cited a recent New Jersey antidiscrimination law. In response, the owner pulled out a gun. The four ran outside as the owner fired once into the air. One of the students was Martin Luther King Jr. At the time he was 21, working on his second bachelor’s degree, and had been living in the bubble of a progressive, racially mixed college town in Pennsylvania. Several years earlier he had written to his sister that in the North, “We can go anywhere we want.” Mary’s Cafe was his introduction to Jim Crow in the North.

King’s story seems discordant with the popular historical treatment of segregation. Say “Jim Crow” and most people reflexively think, “South,” the land of lynchings, whites-only drinking fountains, and seats in the back of the bus. But a separate, parallel universe of bigotry existed throughout the North, even in predominantly black enclaves such as Harlem, where some local stores refused to hire blacks.

In his book Sweet Land of Liberty: The Forgotten Struggle for Civil Rights in the North, historian Thomas J. Sugrue takes us on a journey of the “Jim Crow North,” places where the “colored only” signs may have been missing but the sentiment was not. In suburban communities throughout the North, black families were prohibited from owning property during much of the 20th century. Sugrue ’84CC, a professor of history and sociology at the University of Pennsylvania, writes about the devious strains of racism and xenophobia that existed throughout the North, which resulted in whites-only restaurants, stores, hotels, clubs, beaches, parks, and cinemas.

In his much-lauded Origins of the Urban Crisis (1996), Sugrue explained the forces that kept blacks marginalized in postwar Detroit. Discriminatory housing covenants, whites-only federal mortgage programs, and segregated auto plants created gaping inequalities that fueled animosity and turned Detroit into the most racially divided metropolitan area in the country.

His new book looks at a broader period, from 1920 to the end of the century, analyzing uprisings in Northern cities and how pioneering leaders and the black press helped connect people, allowing protests to turn into national movements.

If we’ve heard about the contributions of enlightened white Northerners partnering with stoic black leaders, fighting against the entrenched racist mind-set of the South, Sweet Land of Liberty provides a more accurate picture of struggles blacks had in the North, correcting the popular view that segregation happened solely below the Mason-Dixon Line.

Sugrue tells stories of black entertainers, such as singer-actress Josephine Baker, who found herself rejected by 36 hotels throughout New York City before she found a room during a visit in 1948. A black comic troupe resorted to wrapping turbans on their heads and faking Arabic so they could enter restaurants and hotels.

Northern battles for equality were often protracted. In 1951, blacks began protesting Cincinnati’s Coney Island amusement park, which barred them. Activists picketed and handed out leaflets, but that didn’t work. They blocked the park’s entrance with their cars, but were arrested. Jailed protesters tried going on hunger strikes. In 1955, the park operators finally agreed to allow blacks to enter, but didn’t permit them to use the swimming pool or dance pavilion. In 1961, 10 years after the first protests began, the park was finally integrated after members of the NAACP were arrested at the pool.

Sugrue devotes a chapter to political strategist Henry Lee Moon’s 1948 book, Balance of Power: The Negro Vote, which lays a plan for blacks to mobilize as an electoral bloc to show that even a marginalized group can wield power. Moon’s thesis convinced President Harry S. Truman to embrace a civil rights platform, which some analysts credit for helping him defeat New York governor Thomas E. Dewey in 1948.

But while segregation may seem like an ugly part of America’s past, Sugrue reminds us that it still lingers. Barack Obama may have broken the highest glass ceiling in America, yet many schools across America — in both the North and South — remain as segregated as they were 50 years ago, with minority children clustered in poorly run schools that have inadequate facilities, outdated books, and a high rate of uncertified teachers.